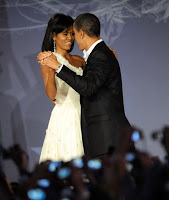 President Obama celebrated his first 100 days in office on 30th April and what a breath of fresh air he is to the political process and how enhanced the stature of the United States is throughout the world as a consequence.!

Both he and his wife Michelle are magnificent representatives of the United States. Each has a unique capacity to reach out and really touch the soul of so many people across the globe.

My youngest daughter, Susan, spent last summer working on the Obama Campaign in Santa Barbara California. While Susan is the child and grandchild of people who have a keen interest in the derring-do of politics she never displayed these instincts until last summer. She is thrilled by the humanity and sense of purpose of the President and Mrs Obama

He certainly cannot be accused of being a slouch or neglecting the fundamental interests of the American people. Yesterday he addressed the very complex issue of international taxation with the intention of rectifying aspects of the system he considers need to be rectified. The President did not indicate that he intends seek the abandonment of deferral arrangement but to streamline them and eliminate abuses. The deferral principle means that a company is not liable to 35% US corporate taxes until profits are actually repatriated to the US. If the deferral arrangement was abandoned US companies would be exposed to double taxation of overseas earnings and this would adversely impact their competitiveness.

Ireland has a keen interest in this agenda because of the large and thriving population of US companies operating here under the auspices of IDA Ireland. Ireland is not, however, a tax haven. The list of American companies who choose Ireland as their European home-from-home are entities with real substance employing in excess of 50,000 people and conferring a host of competitive advantages apart from taxation. Ireland, for example, is the only English-speaking €-zone country. It is an agile and open economy with decades of experience in hosting American businesses making their mark in the 500-million European Union market. It is fair to say that Ireland and the American businesses located here have enjoyed a dynamic, fulfilling and mature relationship over many decades.

The President, in his quest to have a tax code that is appropriate to the needs of America cited an instance of an office building in the Cayman Islands which is headquarters to over 12,000 businesses! He can also be assured that Ireland is not a mail-box economy!

These proposals require Congressional approval. International tax is naturally linked to international trade and trade issues instantly arouse interests, passions and prejudice. America’s role in world trade is no longer isolationist as it between the World Wars. The business community will analyse any proposals and respond in what they believe to be their enlightened self interest. Detailed legislative proposals are not anticipated before 2011.