AIB Board need to get off their vain, egotistical, stubborn arses and recruit an outsider as CEO 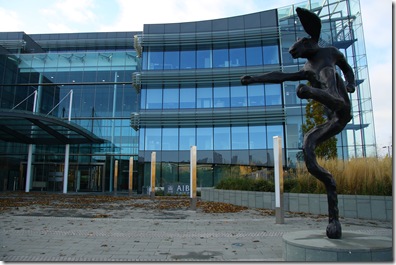 AIB have been flying kites about the prospect of its recently appointed Chairman, Dan O’Connor, becoming an executive chairman. O’Connor, who is also a director of CRH Plc since June 2006, became an AIB director in 2007 when the property bubble had burst. He succeeded Dermot Gleeson as Chairman some months ago.

But what would such an appointment mean for corporate governance at AIB and public confidence?  There are three and a half billion reasons why AIB need a new broom in the corner office and these have to do with sweeping away the viral influence and toxic legacies of Mr Scanlon, Mr Mulcahy, Mr Buckley and Mr Sheehy, each of which severely degraded the stature of AIB.  Being systemically important does not imply that those trusted with this ‘importance’ ought to consider themselves immune to the architecture and principles of acceptable standards of corporate governance.

The Cadbury Report on Corporate Governance was published in December 1992.  There was extreme concern at that time about standards of financial reporting and accountability and this was heightened by the closure of Bank of Credit and Commerce International (BCCI) and the Robert Maxwell saga.

BCCI was closed after major episodes of fraud and manipulation prompting thousands of creditors to sue the Bank of England for failure to properly oversee BCCI. Robert Maxwell drowned in November 1991 when he fell overboard from his yacht, the Lady Ghislaine. which has been cruising in the vicinity of the Canary Islands.  His publishing and media business collapsed as a consequence of fraudulent transaction that he perpetrated, including the illegal use of pension funds.

The Cadbury Report established a code of best practice intended to achieve adequate standard of good governance for all listed companies and those listed on the London Stock Exchange were to be obliged to state if they are, or are not in compliance.

The chairman’s role in securing good corporate governance
is crucial. Chairmen are primarily responsible for the
working of the board, for its balance of membership subject
to board and shareholders’ approval, for ensuring that all
relevant issues are on the agenda, and for ensuring that all
directors, executive and non-executive alike, are enabled
and encouraged to play their full part in its activities.
Chairmen should be able to stand sufficiently back from the
day-to-day running of the business to ensure that their
boards are in full control of the company’s affairs and alert
to their obligations to their shareholders.

Given the importance and special nature of the chairman’s role, it should in principle be separate from that of the chief executive. If the two roles are combined in one person, it represents a considerable concentration of power.
We recommend, therefore, that there should be a clearly
accepted division of responsibilities at the head of a
company , which will ensure a balance of power and
authority, such that no one individual has unfettered
powers of decision. Where the chairman is also the chief executive, it is essential that there should be a strong and independent element on the board.  No such independence has been apparent on the board of AIB, Irish Life & Permanent, Irish Nationwide or Bank of Ireland who have behaved like myopic overfed sheep.  The board of EBS at least jettisoned their deadbeats promptly.

It doesn’t take a genius to understand the appalling consequences of concentrated power in two of the six financial institutions that are now standing with their begging bowls at the door of NAMA.

The overwhelming influence of Sean FitzPatrick provided him with an uncluttered platform to do what he wanted with impunity.  The behaviour of Michael Fingleton, at Irish Nationwide Building Society meant that 80% of the business of a mutual society was focused on property speculation and obscene financial self-aggrandisement on a woeful scale.

AIB has an appalling record of corporate governance which ranged from aping FitzPatrick, DIRT evasion, Insurance Corporation of Ireland collapse in 1985, flagrantly overcharging customers’, allegations of share price support for Dana Exploration through a transfer into the widows’ and orphans’ account in the AIB staff pension fund in 1988, personal tax evasion by former chief executive Gerald Scanlan, facilitation of endemic tax evasion by its own customers through illicit overseas accounts, chaotic supervision of its US subsidiary, Allfirst resulting in the Rusnak $691 million FX rip-off during the tenure of former CEO Michael Buckley, .  Everyone remembers the standards of corporate governance by these sycophants when they deferred like 18th century slaves to the whims of their KBI (key business influencer) Charles Haughey and Des Traynor

I would be astonished if O’Connor is not an individual of the highest probity and virtue but the audacity of the AIB board attempting to subvert the wishes of the Government having stung the taxpayers’ for billions of €, is absolutely unconscionable. The destiny of this business rests with taxpayers’ not shareholders’.  The toxic corporate culture must be exterminated.  The ultimate failure of this brazen culture is in it flaccid impotence to maintain adequate core capital without State intervention and its final act of devastation was to the role it played to inflate the property bubble that collapsed the Irish economy, perhaps for a decade.