Grounds for a review of Irish judicial salaries are overwhelming 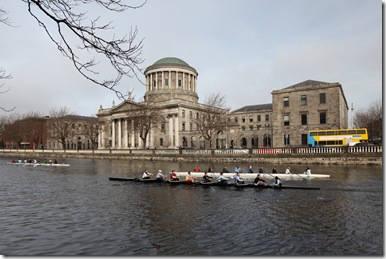 The Journal of Legal Analysis, a Harvard publication, in its Winter 2009 issue, published a transnational comparison of the salaries of High Court judges in 28 OECD jurisdictions - Mexico and Switzerland being the omissions. Chile, Estonia, Israel, Slovenia are not included as they joined the OECD last year.

The data relates to 2004/2005 and showed Ireland’s judges to be the second highest paid, next to their British counterparts.

The salary of an Irish High Court judge increased during this six-year period by 36.6% from €184,889 to €252,720 – the probability now being that Irish judges are the highest paid in the world.

This development a surge in interest by those wishing to become judges.  During the 2004-09 period the Judicial Appointments Advisory Board advertised for a total of 51 vacancies in the Supreme, High, Circuit and District Courts,  There were 1,916 applicants.

Apart from the High Court, there are other features of the Irish judicial reward system which gives Taoiseach, Enda Kenny, plenty of grounds to conduct a Constitutional Referendum to reform judges pay and not to capitulate on their reported request that the tax burden on pension funds in excess of €2.3 million.

The Irish Constitution, Bunreacht na hÉireann, exists to define our nation, defend its institutions and not to provide privileged refuges for the well-connected to escape their civic obligations and contribution to social solidarity, especially at a time of unprecedented crisis and widespread severe hardship.

It was reported by the Revenue Commissioners at the end of 2010 that 22 of the nation’s 147 judges failed to make a voluntary contribution to the Revenue Commissioners last year in lieu of this levy and that the cumulative payments of those judges who did make a voluntary contribution amounted to €1,246,787. If all of them had met the statutory obligations that public sector workers are obliged to honour the Exchequer could have received €2,374,180 from the judiciary last year.

Despite the leadership endeavours of the Chief Justice and the President of the High Court, there is effectively a deficit in Exchequer receipts of €1,358,915 that someone else must compensate – the scale of which would require the pension levy of over 5,400 public sector workers earning €20,000 per annum.

The defence based on Article 35.5 of The Constitution that ‘the remuneration of a judge shall not be reduced during his continuance in office’ has never been tested so the underlying decision is therefore based on political and administrative considerations. This levy is a deduction from gross earnings of public sector workers. It is not a reduction in gross earnings.
Has the levy been applied to judges appointed after the Financial Emergency measures in the Public Interest Act 2009 became law on the 20th December that year?

Their counterparts in Great Britain and Northern Ireland are paid 24% less. This difference costs that Irish Exchequer €5,343,770 - which equates to 67% of the total receipts from pension-related deductions on public service remuneration last year in your own Department. Why is Ireland borrowing from the IMF/EU/HM Treasury to pay this premium so that our judges continue to be the highest paid in the world?

It is perfectly reasonable to compare pay rates in Ireland with those in the neighbouring Common Law jurisdiction because, unlike France and Germany, judges in the UK are recruited from the ranks of experienced lawyers, some of who earn more than £500,000 per year at the Bar but populate the ranks of the 140-strong High Court bench at a salary of £172,753, 27% less than the 36-member Irish High Court. The British rates are also broadly comparable to those prevailing in Australia and Canada. Furthermore, the same arguments with respect to work-load and complexity, impact and sensitivity of decisions, court craft and out-of-court administration, management and leadership responsibilities apply in all of these jurisdictions.

The Irish Exchequer is losing €2,485,924 as a consequence of the judiciary being exempted from the reductions imposed on the public service from 1 January 2010. I have read that judges are also exempted from PRSI. If this is the case, the loss to the insolvent Social Insurance Fund is €1,107,488. The combined impact of this loss would pay the annual wages at minimum tariff of over 200 workers.

Has the reduction and pension levy been imposed on all judges appointed since 1 January 2010?

The salary of the Chief Justice exceeded that of the Taoiseach from the foundation of the State until 1968 when pay parity was established on the grounds that the Head of the Judiciary and the Head of the Executive would enjoy similar remuneration. The differential between the pay of Enda Kenny and the Chief Justice is now 54%. If the arguments for pay parity were solid when rates were rising by 110%, which was the case between 2000 and 2009, how do you intend to choreograph the restoration of this long-standing relationship when the Constitutional impediment has not been tested and judges have responded to the national financial crisis with blinding self-interest?

At present, judges receive unvouched, non-pensionable and non-taxable expense allowances the cumulative annual value of which is €508,856. It seems to me that these are also not ‘remuneration’ within the definition of Article 35.5 of Bunreacht na hÉireann. Did you Department impose the 8% reduction (amounting to €40,708) that applied to all qualifying public service workers since 1 January 2010?

The State is to continue to provide the Chief Justice with a Garda driven car at an average annual cost of €280,000 to commute to the outer suburbs.

The total cost of operating two official cars at the Northern Ireland Office in the year ended 31 march 2010 was under €90,000.

Official car usage in Britain is restricted to official business and from home to office journeys within a reasonable distance, on the understanding that users would normally be bearing classified documents on which they would be working, - as well as security and other relevant considerations.