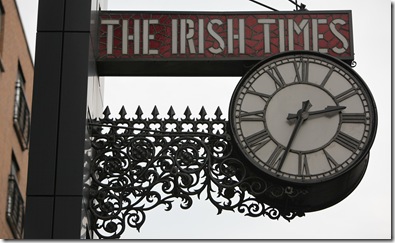 Eamon Gimore argued in The Irish Times (Opinion & Analysis) on Saturday, 9th January that a new national agreement would build on the nation’s strengths, foster solidarity and guarantee industrial peace.

Social partnership has been sustained when its participating pillars were able to deliver incremental financial and social benefits to those they represent.  The weaknesses, limitations and cost of social partnership have been laid bare, especially in the past year. It became paralysed and dysfunctional when there were no resources to deliver.  Participants became lobbyists’ seeking billions of euro exclusively for their own vested interests, but were apparently incapable, at times of economic adversity, of embracing a multilateral perspective, perhaps because their individual mandates are rather weak. Trade unions, for example, collectively represent no more than 25% of the declining national labour force and the collapse of the economy has also taken its toll on the strength of all pillars of the process.

The legacy of national agreements in the past decade is such that Ireland’s harmonised labour cost competitiveness ranked second lowest to Slovakia in the EU-27 and was 11.8% adrift of the EU average by June 2009, as measured by the harmonised competitiveness indicators published by the European Central Bank. If this country is serious and determined about an export-led recovery in knowledge-intensive sectors that will track that of trading partners there ought to be an acute national awareness of what it is that make us competitive.  Why has there been no debate, or analysis, about the prime reasons this country lost a substantial number of skilled, knowledge-intensive jobs in fields such as aircraft maintenance or crystal manufacture? That could have begun, but not ended, with some reflection of the implications of our minimum wage being the second highest in Europe and how a small open economy can foster a standard of living that is both acceptable, realistic and, most importantly, sustainable.

Ireland will only prosper to the extent that it can successfully trade internationally but the social partnership process had grown increasingly insular and delusional in its perspective. We are citizens of a world whose boundaries extend beyond our own definition of fairness, inclusivity and social advancement. The benefits sought through partnership need to be based on the nation’s capacity to compete and on the resources available to fund the benefits sought and legitimate aspirations. Our capacity to generate authentic national wealth is more limited than we might like to admit and the commercial output from it did not grow vigorously when the international economy was vibrant. What impact could the partnership process have in this context when none of the national agreements ever dealt definitively with the issue of national competitiveness and the strengthening of it?

Total social welfare expenditure increased by 238% in the past decade when the Consumer Price Index increased by slightly over 40%. The Social Insurance Fund, which recorded a deficit of €244.7 million in 2008, is now reported to be insolvent, perhaps by billions of euro, as social insurance expenditure exceeded €10 billion last year as a consequence of spiralling unemployment. The €21.3 billion social welfare bill in 2009 was equivalent to 87% of the increase in the national debt. The overall scale of this is a by-product of national agreements and we are now on the cusp of deluding ourselves that these standards can be maintained and that almost €22 billion can be spent on social welfare in 2010 and beyond through growing the national debt.

Mr Gilmore advocates a time-limited inquiry into what went wrong in the banking system. During the decade to 2009 the stock of new residential units in this country increased by 60% when the population increased by just 19%.  But the total amount of residential loans provided increased by almost 500% making Ireland’s residential mortgage bearers’ the second most indebted in the €urozone - next to those in Holland. Data produced last week by the Central Statistics Office indicates that the income per person in the State increased by under 55% from 2000 to 2007 so it doesn't take a wizard to discover the extent of imprudent lending that has taken place and the consequential negative equity that is now a reality. What more could an inquiry elicit except to advocate that financial regulation would be sufficiently robust to defend the integrity of the banking system; that the interests of vulnerable consumers would be robustly defended and that the criminal justice system would take its course effectively and efficiently, where appropriate?

The highest standard of national governance, rather than the most far reaching social partnership, will be the catalyst for economic recovery and vitality. The ability of political parties to persuade the electorate of their capacity to lead and govern will determine the outcome of the next general election.