Can Ireland renegotiate its IMF/ECB/EU deal? 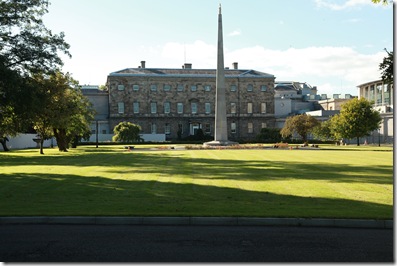 The Irish parliament (the Oireachtas) was stood down today.  Brian Cowen the outgoing Taoiseach has been effectively run out of town and will not contest the general election.  The general election will take place on Fri, 25 Feb.  The potential alternative government leaders have been posturing for the past several days about renegotiation the bailout deals.

It is hard to see this as anything other than empty, vacuous, meaningless, political posturing! The horse has bolted and the stable door is off its hinges. Those with massive ambitions to renegotiate have no leverage.

The bailout deal was not negotiated in the first instance. Those whose interests were threatened arrived in the country, walked the streets, sniffed the air, took the Government by the scruff of the neck and told them that they were no longer in control of the economic stewardship of Ireland. The interest rate was prescribed unilaterally, as were the ongoing detailed quarterly reporting and compliance arrangements. That in a nutshell is how Ireland has been humiliated and joined the line of other can’t cope, won’t cope headless-chicken nations – where ministers abandon their roles abruptly and for no rational or coherent reason.

Apart from the bail-out proposition, over 80% of national debt is due to foreigners. Those foreign interests together with the IMF, ECB, EU and HM Treasury have the Irish authorities under the heel of their jackboot and they have no option but to be as compliant as a prisoner seeking goodwill in return for good behaviour.

The relationship the Irish Government has with these stakeholders is going to provide a salutary lesson in the concept of moral hazard and how its consequences cannot be always shuffled and finessed into the ether, as has been the case for too long within the country.

What the electorate will take a particular interest in is the capacity of the alternative government to bring about change in spheres over which they ought to have some control and leverage – for example, the gigantic scale of fees paid for professional advice and the ancient restricted structures that facilitate these charges; the cost of running the NTMA and its foster children and the transparency of these entities being specimens of how a government and their senior civil servants could demonstrate that their bargaining power and focus is not totally exhausted.

When the Fingleton 2008 ‘€1 million pre-contracted bonus’ has been redeemed the Government will have shown negotiating form. When bankers appear in the criminal courts the country will have demonstrated a sense of resolve and can begin to lay claim to be taken seriously. But blather at the onset of a general election campaign is just that.