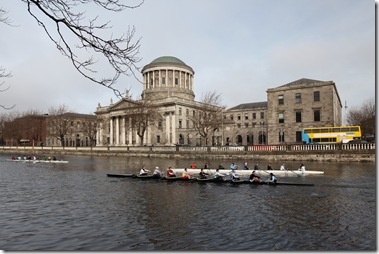 The gallop of a posse of greedy Irish barristers and solicitors has been halted by the Taxing Master, a court official who adjudicates on their costs.  He imposed an 82% reduction on fees of €2,143,546 arising in a personal injury case involving  meat factory worker who was injured by a falling carcass.

Should readers conclude that the leadership of the Department of Justice and Law Reform is as weak and as ineffectual in defending the public interest as that in the Department of Finance  over the past decade?

The Taxing Master described these charges as “revolting in the extreme”. They are a direct and unmitigated consequence of a profession shielded from the realities of a genuinely competitive marketplace, cosseted by self-regulation and indifferent to the interests of consumers and the public at large.

The Competition Authority reported on competition in the legal profession in 2006 and issued 29 recommendations, over half of which were directed at the Department of Justice and Law Reform and several of which relate to fees. This Report stressed the urgent need for radical reform, independent regulation a far higher standard of transparency with the public. The Department acted on only one of fifteen recommendations directed at it – relating to the use of the first official language.

Last year The World Bank reported that legal fees in Ireland were among the highest in the world as The Competition Authority’s recommendations. Is this to be the pivotal catalyst to spur an export-led economic recovery by multinational corporations in Ireland?

The Department of Justice and Law Reform is probably the largest purchaser of legal services in the State. It is high time that the recommendations of The Competition Authority no longer gathered dust and cobwebs and that our country had a legal profession that is grounded like its counterparts in other common law jurisdictions