NAMA and the Irish hotel industry 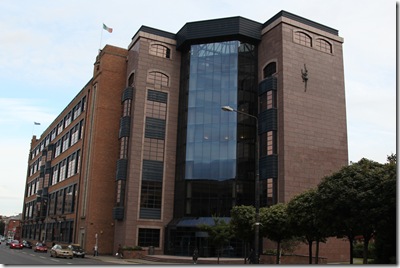 I am cringing with horror and revulsion at the report in the Irish Independent on Friday, 23 July that Mary Hanafin TD, Minister for Tourism, Culture and Sport is to meet NAMA to discuss ‘the problems’ in the hotel industry.  Their industry spokesmen concurrently attempt to blackmail and browbeat the citizens of Ireland by telling us that their demands to eliminate unwanted capacity  would cost less than the welfare costs in the event of the subsequent, but inevitable, meltdown of this industry.  She must not cave in to this delinquent posse and they must endure the total impact of the unmitigated consequences of their own decisions.  You must especially stamp on their demand that those who benefited from €1 billion in tax foregone should be let off the hook in meeting all obligations and conditions attaching to this.  Jimmy Deenihan, the Fine Gael spokesman on tourism is quoted in the article as saying – you “must show leadership” and so must he.

Public confidence in the NAMA enterprise is sceptical and uncertain, at best, and if it is demonstrated that NAMA is prone to heavy-handed political manipulation at the highest level the public will be extremely distressed and angry.

Hoteliers exist in a capitalist system which functions on the basis of risk and reward, as is the case with our economy as a whole.  Nobody forced them to increase capacity by 18,000 rooms since 2003 and this reckless expansion occurred without any commercial rationale, or informed foresight,  whatsoever to justify it.  The hotel industry had already expanded by 60% between 1997 and 2003 at a cost to the taxpayer of €140 million in taxes foregone.  This vested interest was therefore totally indifferent to risk and acted as though the only price on risk is that paid by the State with our money.

They also have the audacity to demand a State-sponsored ‘high-level’ committee to gerrymander their industry by selecting which hotels would be eliminated and which would be maintained for strategic posterity, featherbedded, of course, by impoverished and stressed taxpayers who have contributed €1 billion in taxes foregone since 2003 to create massive unwanted capacity.

While the EU Commission approved the accelerated capital (depreciation) tax allowances as a legitimate State aid on 23 December 2002, Commissioner Monti did point out that “the Commission regrets that Ireland put the aid in question into effect, in breach of Article (88)3 of the Treaty.”

When hoteliers successfully lobbied the Department of Finance they argued that these very generous tax allowances would induce speculators (should I have said investors?) to build hotels at regional locations where there had never been a hotel before - and which saw very few customers subsequently.  When the EU Commission wanted these allowances guillotined on 31 July 2006 the Department of Finance persuaded the Commission to extend them to 31 July 2008 on a tapering-out basis  “because there was a very large backlog of pipeline projects and the rush to complete construction would inevitably lead to short-term overheating of the Irish construction sector” – not because the State aid was yielding positive results in the form of viable sector at remote regional locations.

The hotel industry speaks of the importance of its economic contribution to the State.  A critical illustration of economic stature is money in the bank.  Central Bank data indicates that hotels and restaurants increased their bank deposits since 2003 by only  €115 million to a total of €655 million in 2010 – less than one third of 1% of the total deposits in banks by Irish residents.  That is equivalent to less than €9,000 for each of the industry's 60,122 rooms.  But the very prudent and far-sighted Irish banks lent the industry €4 billion since 2003 to build the unwanted capacity and the average indebtedness in respect of each of the unwanted rooms is now over €350,000.  The tourist industry as whole owes the Irish banks over €10.9 billion - €1 for every unit of integrity and intelligence quotient that exists in the top-level of our banks.

The hotel industry lobbyists hum like choir boys about the €10 departure tax as though it was a red-hot poker impediment to their prosperity.  Their cute-hoor mentality, of course, precludes any suggestion as to who will provide the revenue were this tax to be eliminated.  The old-age pensioners and the infirm would bear the burden, I presume.  I suppose their next melodic aria will be to lobby the relevant authorities to increase the UK minimum wage from £5.80 per hour and the US minimum wage from $8 per hour to enhance the prospects of filling their bedrooms and meeting the exorbitant charges from time to time – ‘because these markets are so important’.

The hotel industry is the author of its own catastrophe havoc with the connivance of the State, the EU Commission and its ever-friendly bankers.  They tell us that it will recover in five years if it is kept breathing through one nostril with relief from local authority rates and additional large dollops of cash from our national debt.  Recovery of the incumbent regime is a most unlikely prospect and there is certainly no evidence to support a 5-year time frame.

The vacuum that is created by the destruction of this industry will be filled in due course by a new generation of hoteliers whose understanding of capitalism, providence and insight will hopefully be better honed that the current generation of losers and the Minister of the day might even have the possibility of presiding over an industry that is viable and functional while NAMA will have reached the geriatric stage of its natural life uncorrupted by political meddling.