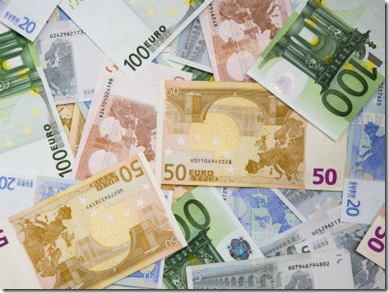 When the €uro became the active currency of Ireland on 1 January 2003 the total value of the currency in circulation in the country was €2,897 million. Currency represented 3% of the nation’s money supply in 2003.  Cash in circulation throughout the Eurozone has grown about 11% per annum since 2002

Currency in circulation increased to €11,956 million at 31 December 2010 and represented 6.7% of the money supply in Ireland. The total value of Euro circulating throughout the 17 member Eurozone was €850 billion so the Irish share of this is 1.3%. Ireland’s GDP is roughly similar to that of Connecticut.

The makeup of the currency in circulation in Ireland is as follows:

Ireland is one of the 14 jurisdictions which produce Euro banknotes. Under pooled production arrangements the Central Bank printed 127.5 million banknotes in the €10 denomination last year. This denomination was also produced in Germany, Greece, France, Italy and Austria. Total volume produced was 1,540.1 million units with a value of €15,401 million.

Despite the growth in non-cash payments throughout the world, cash remains the predominantly popular form of payment. It is quick and direct; freely available to users at point-of-use and cash is anonymous and non-discriminatory. Experts also say that cash is less prone to fraud than other payment methods.

The global use of payment methods, other than cash (direct debts, credit transfers, cards and cheques) has grown steadily – especially in China (+29%); Russia (+66%) and South Africa (+25%), while volumes grew more modestly in developed countries.  Non-cash payments in Ireland grew at a compound rate of 11% from 2001 to 2008.

Credit cards account for 40% in most countries and above 58% globally.

PayPal facilitated €51.3 billion in total payments in 2009 and is forecast to grow this business to €105.9 billion next year. Over 81 million people are active users of PayPal and these accounted for 6% of all global online payment transactions in 2009.

The life of a banknote is typically two years – somewhat less in the case of lower denomination notes. This year 6,017.9 million new banknotes in the Euro currency will be produced with a value of €171,274 million. Approximately 751,000 counterfeit banknotes with a value of €37,759 million were removed from circulation last year.  39,025 million banknotes were withdrawn on grounds of being unfit for use.