Have Irish bishops ‘with the stroke of a pen really made themselves answerable’? 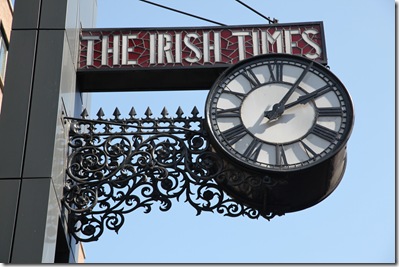 The title of an article by Breda O’Brien The Irish Times on Sat, May 21 that ‘With the stroke of a pen, bishops made themselves answerable’ strikes me as being disingenuous and misleading because it is simply not the case.   If readers were to accept this exclamation at face value they might reasonably construe that the much put-upon bishops’ have become accountable to something other than their own foggy shaving mirror, or someone other than the face that smiles at them from the contents of the whiskey glass held in their own hand from time to time.  But the incontrovertible evidence is that The Hierarchy have engaged for over two and a half years in yet another Machiavellian episode of cunning subversion intended to hoodwink the public with their own toxic blend of metal reservations and double entendre.

Shortly after the Safeguarding Board exposed two diabolical child sex abuse allegations in Cloyne Cardinal Brady stated that his friend of 50 years, Bishop John Magee, should not resign.   Brady also issued a statement on 2 January 2009 about the role of the Safeguarding Board in which he said that its role is to accomplish a ‘consistent child safeguarding policy throughout Ireland based on verifiable and accountable structures of best practice’.  Brady acknowledged that the handling (also referred to by Magee as a ‘lacuna’) of two child abuse allegations in Cloyne brought into question the efforts of all who implement policy on safeguarding and statutory guidelines.

“Everyone is entitled to be reassured that when commitments have been given to implement statutory guidelines and agreed policies for safeguarding children in the Church, these are reliable and trustworthy. The Board is in a unique position to provide such assurance. It must continue its work in cooperation with the statutory authorities and with the full support of everyone in the Catholic Church in Ireland”. It was also Brady who suggested in January 2009 that the Board might explore the possibility of conducting a review of current child safeguarding practices in every diocese across the island in cooperation with the relevant statutory authorities.  ‘The core principle of safeguarding policy is a Gospel value’, Brady added.

His counterparts met on 23 January 2009 and they unanimously requested the Safeguarding Board to review current practice and risk in the safeguarding of children within their dioceses.

The 2010 Annual Report reveals that is was not until March 2011 that the ground rules for conducting these audits were agreed.  But the audits may only now proceed on the basis that the Board will not comment publicly on the findings of the review of each Church authority, nor will the Board comment on any recommendations in practice or procedure that they deems necessary.  Furthermore, the introduction of any information into the public domain is to be only possible with the consent of the implicated relevant Church authority.  Placing a muzzle on this Board is hardly a policy by bishops’ that could be remotely construed as making them answerable to anybody or to enhance their credibility.

This basis for beginning these diocesan reviews also ought to be considered  in the context that the Safeguarding Board has an approved and, what it describes, as a ‘top-rate data protection policy’ to which it fully adheres in all its operations and the Board is fully confident that it fully complies with data protection legislation as it exists in Ireland and Northern Ireland.  Access to relevant documentation when responding to safeguarding concerns had been specified in the listed objects of its company.

It is also pertinent to point out that the number of child abuse allegations continues to be alarmingly high, notwithstanding their longstanding history in many instances.  It is also deeply troubling that this Board has not been contemporaneously informed about allegations of child abuse when these have been reported to the civic authorities demonstrating again contempt for transparency, candour and directness.  What is this a symptom of?

The non-binding sex abuse policy issued on 17 May by the Congregation for the Doctrine of the Faith seeks to reinforce bishops’ exclusive authority in dealing with abuse cases and states that lay review boards, such as the National Board for Safeguarding Children, ‘cannot substitute’ for bishops judgement and power. How can this be taken seriously in Ireland when not alone have bishops failed miserably in following their own guidelines and muzzling lay review boards to make them impotent ensuring that compliance is impossible.

The Chairman of the Safeguarding Board has highlighted the opinion that a cultural correction is required within the Irish Church in making the point that the work of the Board alone is not enough to ensure the adequate safeguarding of children and specifically cited inherent weaknesses in areas such as institutional management and governance in the Church.

A fundamental issue at this stage is whether the bishops trust, or do not trust, their own Safeguarding Board – an entity conceived by them; populated by them, overseen by them and remunerated by them.  The leadership of the Board has demonstrated tenacity, fortitude, independence and candour which is a crucial foundation to winning and maintaining public confidence.  The purpose of these reviews of safeguarding practice is to mitigate risk to children and that has to be accomplished without jeopardizing public confidence in the Board, including dealing with personal data in an appropriate manner.

The bishops’ have severely strained public confidence and credibility.  They are led by an individual who concealed the vile criminality of Brendan Smyth from the civic authorities for 19 years before it was exposed in a television documentary and who refused to regard this as a resigning issue as the pews continue to empty

How can the public trust bishops’ and the notion that they can muzzle a so-called independent review body answerable only to themselves is derisory and contemptuous.  Perhaps this facets of their attitude to accountability might be discussed in another article as the public are likely to be agitated about this issue once again when the report on allegations against 19 priests in the Diocese of Cloyne, a diocese with just 46 parishes, is published.