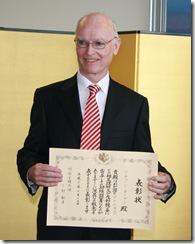 My former colleague and friend, Dick Ryan, was honoured by the Japanese Ambassador to Ireland, His Excellency Toshinao Urabe  this evening at the Embassy for his contribution as Chairman of the Ireland Japan Association.

Dick retired five years ago from a series of top-level roles in IDA Ireland. He, his wife, Helen and the family spent several most interesting years in Tokyo.  Dick speaks with great passion and enthusiasm about his time there.  He studied the Japanese language with gusto  and I have no doubt that he absorbed everything stimulating that Japan could offer!

The celebration was attended by the extended Ryan family and a great many friends and well wishers.

The Ireland Japan Association has operated since 1990 and has a far reaching range of interests including a business and social dimension.