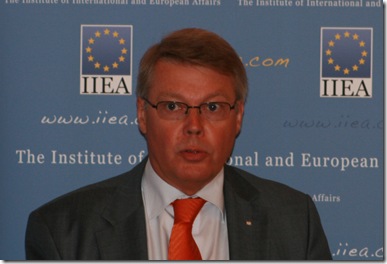 Governments should avoid the onset of a systemic financial sector crisis in the first place but, of course, avoidance is never optional! It is merely an aspiration!

When a crisis does occur it is the unequivocal responsibility of government to maintain liquidity so as to avoid a credit crunch; to restore confidence when this has been undermined and to ensure that the capital base or capital reserves of the national banking system is adequate following a period of excess lending. These are the views of Bo Lungdren, currently Head of the Swedish National Debt Office and formerly Sweden’s Deputy Minister for Finance when the Swedish banking crisis unfolded in the early 1990’s. He spoke at a lunch meeting of the Institute of International and European Affairs in Dublin on Tuesday, July 7th.

Lungdren succeeded Carl Bildt, the former Prime Minster of Sweden and current Foreign Minister, as Leader of the Moderate Party from 1999 to 2003. But when he was a member of the Swedish Government confronted with the banking crisis his party was one of four parties in a minority coalition government.

The Swedish crisis bears some resemblance to that currently occurring Ireland but the similarities. The Swedish financial system had been deregulated in 1985 and the inflationary period which ensured between 1985 and 1990 caused a property boom which evolved into a property bubble. Private sector credit in Sweden increased from 85% to 135% of GDP in the five years prior to the bubble bursting.

The crisis in Sweden was of a more moderate scale than that in Ireland. It cost €6.5 billion to repair the damage (4% of GDP), of which €2 billion was recouped within five years. Two of the seven mid-sized Swedish banks were nationalised (Nordenbankenn now known as Nordea and Gota Bank) and one of the seven did not participate in the government support programme. Ireland has already injected €11 billion (7% of Ireland’s GDP) in three banks – the recently nationalised Anglo Irish Bank, Bank of Ireland and AIB Bank.

The difference in scale is illustrated by the amount of credit outstanding at the time of crisis in both countries. Private sector credit in Ireland has increased from 136% to 216% of GDP in the five years (2003 to 2008) prior to the collapse of the banking system here. Household debt in Ireland, according to the most recent Quarterly Bulletin from the Central Bank of Ireland indicates that household debt outstanding in Ireland is €148 billion – a figure that is in excess of 80% of current GDP.

The Swedish crisis was regional in nature – impacting the financial systems of Norway and Finland to some extent. Its resolution was expedited by a currency devaluation. The complexity of the current crisis aggravated as it is by the asset securitisation phenomena has uncovered a scale of loss that had not been anticipated.

The Swedish approach was to guarantee the depositors and creditors of the financial system – but not the shareholders. The incidence of moral hazard was curtailed by exacting accountability among those who caused the crisis. directors, management and shareholders. The Swedish Government decided to what extent it would support banks’ in difficulty. They did not determine or directly influence this matter.

Lungdren was discreet enough not to offer public advice to the Irish Government although he did share his opinions with the Oireachtas Committee on Finance and the Public Service.

Sweden did not establish a bad bank, an equivalent to Ireland’s National Asset Management Agency and he cautioned against discounting the price of assets taken on by a bad bank on the grounds that the capital vacuum created had to be filled. Assets should be valued on the basis of ‘mark to market’ if a quick recovery of the financial system is to be achieved. He also emphasised the importance of transparency if the credibility and integrity of a rescue initiative is to be maintained. Stress tests are merely base-line scenarios and must be treated accordingly.

Swedish banks incurred losses of €25 billion during that crisis. Credit losses in Ireland have been estimated by the IMF to potentially be €35 billion and the Irish economy is about half the size of the Swedish economy.

Some Swedish banks are apparently experiencing fresh difficulties as a consequence of exposure to the economic crisis in Baltic countries, especially Latvia and Estonia.