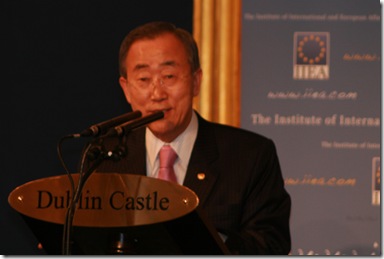 “The sacred mission of the United Nations is to save nations from the ravages of war”, according to Ban Ki-moon, Secretary-General of the United Nations. He visited Dublin on 7 July and spoke to an invited audience in St Patrick’s Hall, Dublin Castle about 60 Years of Peacekeeping.  His speech as personable, quoting the verse of  Nobel Laureates Yeats and Heaney, as well as greeting his audience in the Irish language.

Ireland joined the UN in 1955 and has participated in peace-keeping activities since 1958.  Ban Ki-moon complimented the Irish participation, while remembering the 90 soldiers who died in UN service and the nation’s role as ‘bridge-builder’.  He  acknowledged the UN Legal Counsel appointed in January 2007, Irish-born, Patricia O’Brien is the first female to hold this position.  He also mentioned his friendship with Bono.

The Secretary-General defined the sacred responsibility of the UN as ‘saving people from the ravages of war’, but that, in the words of Yeats - ‘peace comes dropping slowly’.  He mentioned difficulties with resources, citing a need for 18 helicopters in Darfur as as example.

The UN is currently involved with 16 major peacekeeping operations involving 78,000 military personnel, 11,000 police personnel and 23,000 civilians.  There are 193 sovereign members of the UN.  The organisation was set up on 24 September 1945 by the victorious Allies in World War II.  But the issues currently faced are increasingly complex and multidimensional.  The world economic crisis is curtailing activities as is a lack of political will, although the arrival of President Obama is changing attitudes in the US.  However, partnership with regional bodies such as the European Union and African Union is helping with respect to donor support, humanitarian relief and a capacity for rapid response.  Member solidarity has never been more important to the mission of the United Nations which is in the process of redefining itself in a quest for greater efficiency and purpose.

Mr Ban is the eighth Secretary-General of the world body.  He is a former Minister for Foreign Affairs of South Korea.