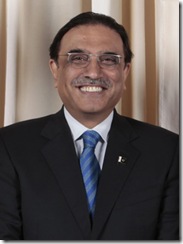 There are vey few countries whose citizens are abandoned by their Head of State at time of widespread distress and crisis.  The President of Pakistan, Asif Ali Zardari, took himself off on a 5-day soiree to London while those of his citizens that have not been drowned are floundering in flood water, breast-deep.  This very important man is the widower of Benazir Bhutto, who served twice as prime minister and was assassinated in December 2007.  He is also reported to be the 5th richest person in Pakistan

Meanwhile, the Irish people have been bombarded with advertisements this week to provide succour.   David Cameron must have been deeply impressed with this visiting personality cult but Cameron would also know that were he to abandon the Brits in a crisis of similar gravity his  tenure as prime minister would come to a very abrupt halt.

The 11th President of Pakistan maybe very rich and very privileged but he is a disgrace.  He has treated his office and his people with contempt. Spineless leaders are bereft of priorities formed by empathy and basic moral authority.

I saw this pathetic weasel of a man speak on BBC Television last night and it is a long time that I have listened to such inconsequential waffle and blather as he explained the significance of his visit to the UK.  He came across as an empty-headed, vain, self-absorbed fool who is wholly disconnected with his own people and whose capacity to deliver anything of value anywhere in the world is severely compromised.

Genuine leaders display loyalty to their own people, especially  at a time of severe distress and their priorities and presence are with them.  They deal with a crisis directly – even if that is only a matter of providing moral support through their presence.  Is there any tragedy in Pakistan that would keep this naïve clown at home, or is his infinite vanity and pompous nature such that he resides in a bubble above the aura of human distress and misery?

Perhaps he should be  reminded of the international travel pattern of Nicolae Ceausescu, especially his very important trip to Iran on 18 December 1989 and the consequences of that episode of presidential delegation.

His ambassadors ought to make a public statement as to whether the people around the world should open their purses and wallets while President Ali Zadari behaves as he does.  How much of Ali Zadari’s personal wealth will be donate to the alleviation of this crisis, as he is reputed to be one of the five richest people in your country and will the amount of his donation be a matter of public record, or does he also delegate that matter to the UN?