The World has arrived in Dublin 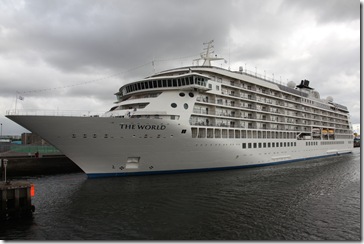 The World has dropped into Dublin.  This is a cruise ship with a difference because it is the first ever residential cruise ship.  Built in Oslo in 2002, it has 166 residential units that sell in a price range from €500,000 to €10 million for a suite that can accommodate up to 12 people.  One, two and three bedroom residences are available.  Monthly dues start at €20,000 to cover travel and overheads, including meals from the liner’s four restaurants, deli and gourmet grocery store.  The owners of these residents enjoy a net worth from €5 million+.

The World departs for Cork on Sunday, 8 August and for the remainder of the year its itinerary will include Faroe Island’s, Greenland, Iceland, Newfoundland, Boston, Fort Lauderdale, Rio de Janeiro, Montevideo, Buenos Aires and Christmas will be spent on an Antartica expedition.

The New Year will shepherd the fjords of Chile, the west coast of South America with many 5-day stops en route before reaching the Panama Canal in March.  The voyage then proceeds around the Caribbean and up the east coast of the US, stopping at New York before heading to Portugal, Bordeaux, London, Edinburgh by mid June.  From there the vessel proceeds on a tour of Baltic ports including Helsinki and St Petersburg before heading to Amsterdam, the Mediterranean and onwards to Capetown, South Africa for Christmas 2011.

Labels: cruising the globe in a cruise ship residence, The World