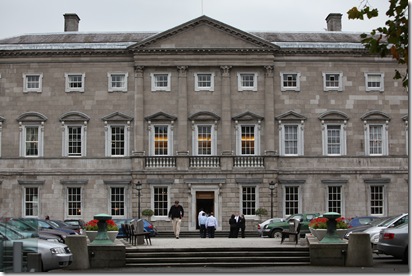 When the Select Committee on Members’ Interests of Seanad Éireann found that Senator Ivor Callely had misrepresented his normal place of residence for the purpose of claiming €81,500 in allowances I contacted the Committee.

I asked on 24 July if the Committee could confirm if Senator Callely has honoured the clear undertaking given in his evidence on 25 June 2010 that he would reimburse, or repay, any overpayment of allowances?  If this undertaking has not been honoured, what steps do the Committee propose to take in the light of their own determination and findings on 14 July 2010 to preserve public confidence in the Seanad and its members and within what time frame will this issue be equitably resolved?

I pointed out that there are, according to statistics provided by the Revenue Commissioners, over 900,000 people in our workforce of 1.8 million that earn €20,000,or less, per annum.  It would take the total income tax deductions in a fully year of over 750 of these men and women to fund the allowances that Senator Callely claimed from his second house in County Cork that were the subject of the Committee’s investigation.

The Clerk of the Committee replied that the repayment of any allowance is now a matter for Senator Callely and the authorities in the House of the Oireachtas Service and the Committee has no further role in this matter.

Senator Eugene Regan, of Fine Gael, is a senior counsel.  He wrote an opinion article on the Callely issue in The Irish Times on Saturday, 21 August titled ‘Callely not out of the woods on suspension’.

Senator Regan opines that the Seanad is judged by the citizens not merely on the transgressions of individual members but on how it is prepared to deal with transgressions and how prepared it is to exercise the powers available to the full.  His point is well made.