How critical is Irish-American support to a President of Ireland?

I flew from Istanbul to Dublin early this morning and browsed an opinion piece on the four-hour flight in The Irish Times by former US Congressman Bruce Morrison about his friend Niall O’Dowd.  Morrison was responding to a previous opinion piece written by Walter Ellis, s former journalist at this paper, who argued that O’Dowd is ‘too much of an Irish-American for the Áras.

Ellis contended that O’Dowd sees Ireland as a brand, not a nation and that Irish-Americans are ‘too misty eyed’.  Morrison countered this argument by pointing out that O’Dowd successfully engaged a range of the diaspora in many ways to support the interests of the mother nation.

When I read Morrison’s article one would think that Mr O’Dowd is seeking to become primus inter pares of an enclave rather than Head of State in a sophisticated nation, notwithstanding that the 42-million strong Irish-American diaspora is as multifaceted and distinguished as the largest diamond in the world.

None of those seeking consideration to be candidates in the forthcoming presidential election have either demonstrated that they understand the role of the President or how they are qualified to conduct that Office - without controversy. All suffer from the hazard of very limited name and reputation recognition in what will be the first such election in fourteen years. Nobody under the age of 31 years has ever voted in a presidential election and half the total population is under the age of 35 years. More than 10% of the total population were born elsewhere and many of these are now Irish citizens and will be first-time voters in a presidential election. 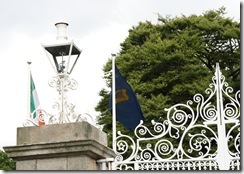 This is why the Office requires an incumbent with a sophisticated, far-reaching perspective of our legacy, our circumstances and our ambitions; someone whose presence inspires awe and admiration rather than explanations and scepticism.

But the essence of Mr Morrison’s argument, that Mr O’Dowd can leverage ‘valuable support’ for Ireland in America does not take into account that many doors currently open to Mr O’Dowd will also be open to any person who is President of Ireland and are most likely already open through other avenues, such as the Global Irish Network that is due to convene for the second time in Dublin Castle on October 7th. Therefore, had Mr Morrison provided some rich and colourful insights into the competency, skills and sophistication of Mr O’Dowd to enable him become a statesman, rather than influence peddler in one large jurisdiction, the readers might be more enlightened. But he has left them with nothing interesting to cling to.

Apart the political parties the nation’s county councillors’ are also a gateway to a nomination. This is the same myopic cohort that has facilitated the littering of this insolvent nation with vacant and unusable ghost housing estates. The fear now is that they will litter than nation with ill-qualified ghost presidential candidates. We cannot indulge delusional fantasists who are mere man, or women, of straw. The voters need to be convinced beyond doubt of the suitability of candidates. But since so little of real relevance is known about any of them it is up to each of them and their advocates to make defensible case to the electorate based on their understanding of the role and the qualities (as opposed to purported contacts) that they claim for themselves. The Office requires the incumbent to be the President of the entire nation not segment(s) of it, whether at home or abroad.  It requires a statesman, not a salesman