Who is fit to be President of Ireland? 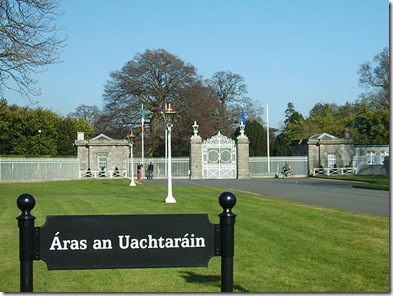 Ireland is now less than six months from the first election since 1997 to elect a new President.  No candidates have been confirmed to date. But this will be an election which will test the stature and mettle of the political parties which they will only pass if they deliver worthy candidates with the exceptional qualities necessary to become an admired articulate role model for Irish citizens across the world but survive intense scrutiny and far-reaching expectations.

The term of the next President will coincide with the centenary of many milestones of our nation. Having been deeply humiliated by the surrender of economic sovereignty due to incompetence and delinquency many Irish citizens speculate, with uncertainty and concern, about what may ahead.

Blogging in The Irish Times on 6 June, under a headline The Áras: Nice Job If You Can Get It – Deaglán de Bréadún refers to the Office being a ‘very prestigious job, well-paid, nice accommodation, lots of foreign travel and optional workload, i.e., you can work really, really hard or you can do the standard amount and then go and play golf’.

The reference to ‘an optional workload’ must be either tongue-in-cheek or betray a fundamental misunderstanding of the nature of the Office of President. Our Head of State is the Custodian of the Dignity of the Nation.

The presidency is not ‘a job’. The gardener, the cook, the chambermaid,the drivers,  the Secretary-General to the President and the clerical support staff at the Áras have jobs - but the President does not.  The President has an incumbency with an onerous burden, not least of which is to respond to the zeitgeist and soul of the nation.

The complex role of President of Ireland requires extraordinary discipline, dedication, vision, energy and understanding. The nation may have been beaten into economic turmoil by unworthy bankers and cunning political insiders and too many constitutional office holders have failed dismally to live up to their mandate. But President McAleese is concluding her 14-year term with a consistent high approval rating that many leaders would crave for but never achieve. In her case this is a consequence of her exceptional capability, leadership and judgement and because she is authentic and has had the exceptional support of an outstanding spouse.

The presidency is not a role for the feint-hearted or the ambivalent because of high public expectations and the intense scrutiny that surround it. The range of skills required are quite daunting – diplomatic, representational, nation-building, nation-parenting etc. – characteristics that are not merely a function of overweening personal ambition. It requires candidates who, needless to say, can demonstrate unimpeachable integrity.  President McAleese has a particular aptitude to reach out effectively to all parts of society without being a captive to any one of them.

The next President of Ireland will be expected to redeem that nation’s reputation and stature.

None of those aspiring to become candidates have indicated what they personally believe makes them sufficiently distinguished to become our Head of State of what President Kennedy referred to with deep pride as one of the ‘five feet high nations’; an ‘isle of destiny, a destiny that will be glorious’.

When aspiring candidates start to share their convictions about themselves with all of us and describe how the character of their presidency might evolve society will begin to have something to cling to. Some say they want a conversation with the nation. But does the nation want a President or a therapist with a set of tarot cards?

Furthermore this Office has become something of a family enterprise with those close to the President making an enormous contribution to the success of the Office. Aspiring candidates might bear in mind that society are also curious about your supporting cast and how he, or she, might enhance the Office. What’s the package?