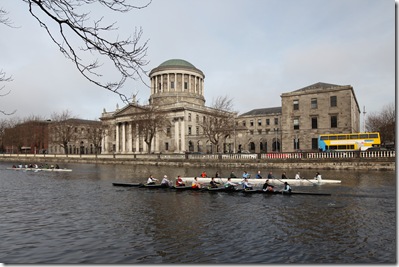 The High Court yesterday (7 June 2011) disqualified Jim Lacey (61) of Grove Avenue, Blackrock, Co. Dublin, the former chief executive of National Irish Bank from 1988 to 1994 and former Fianna Fáil party insider , from serving as a director or officer of any company for 9 years on grounds of unfitness.

The court found that Lacey had been grossly negligent and that his conduct constituted a fundamental failure of governance. Lacey remained as a non-executive director of NIB from 1994 to 1997.  He had not acted on internal audit findings that had been brought to his attention.

He is the 10th former executive of NIB to be banned and cases are outstanding against a further six.

The extent of his unfitness was described in adverse findings of the High Court Inspectors Report on NIB which was published on 30 July 2004. The Report covered the period 1988 to 1998 when NIB was owned by National Australia Bank and, following an expose by two RTE journalists - not by the Central Bank.

The High Court appointed the Inspectors on Monday, 30 March 1998 to investigate:

The Revenue Commissioners, as of 31 December 2010, have collected €60.14 million involving 312 cases of tax evasion as a consequence of special investigations following the NIB debacle.

Lacey resigned his two State appointments to the board of the Irish Aviation Authority and Dublin Docklands Development Authority as well as his position as a fundraiser for Fianna Fáil on Friday, 27 March 1998 “for personal reasons that should not be interpreted in any way as implying any impropriety by me in my previous role with NIB”

Lacey had been a close adviser to Bertie Ahern and had been appointed to Forum 2000, the Fianna Fail fundraising vehicle. Former Environment Minister Noel Demspey, who appointed Lacey to the DDDA in 1997 ‘accepted his resignation with regret’

When the High Court Inspectors Report was published the Head of the Financial Regulator, Liam O’Reilly – until last month a director of Irish Life & Permanent Plc. and member its Risk & Compliance Committee, stated on 30 July 2004 “The type of activity described in the High Court Inspectors’ Report is utterly unacceptable. As a regulator with a strong consumer mandate we are absolutely determined to ensure that there is no place for this type of activity in the financial services industry of today.

In light of this and other recent charging issues that have emerged, the Financial Regulator is currently engaged in an industry-wide exercise focusing on appropriate systems and controls to ensure that all credit institutions are fully in compliance with all relevant laws and requirements. The Financial Regulator is also of the view that in considering how to deal with regulatory issues, financial institutions must consider factors outside their specific legal and regulatory obligations. In particular, financial institutions should seriously consider their responsibility to maintain the trust and confidence of their customers. There is a clear message coming through - financial institutions that put short-term profits before customers will suffer the consequences. The cost of engaging in unacceptable behaviour has been proven to be very high, in both financial and reputational terms”

Mr. Justice Peter Kelly after disqualifying another former executive of NIB, Nigel D’Arcy, for 9 years stated in 2005 that "The edifice of banking is built on a foundation of trust. On the Inspectors findings there was a breach of trust. The operation was carried out over a period of years in a deliberate fashion"

Following the Lacey judgement, Paul Appleby Director of Corporate Enforcement stated  “The NIB/NIBFS Inspectors found that responsibility for the various improper practices which existed within the Bank rested with its senior management.

Last April, the High Court determined that Mr Lacey bore important responsibility for the continuation of the six practices criticised in the High Court Inspectors’ Report, and I welcome the Court’s affirmation of the significant duty which rests with company directors to secure their company’s compliance with its major legal obligations.

Today’s decision reminds directors of their responsibilities and of the personal consequences which may flow from a failure to take effective steps to correct non-compliance in their companies. The decision is also important in clearly demonstrating that we are serious about promoting and upholding high standards of corporate governance in Ireland.”

The current status of the nine disqualification actions originally initiated in 2005 is summarised in the following table. Seven of them (including Lacey’s case) remain before the Courts.


The effect of a disqualification order is to prohibit a person from being appointed or acting as an auditor, director or other officer, receiver, liquidator or examiner or being in any way, whether directly or indirectly, concerned or taking part in the promotion, formation or management of any company, or any society registered under the Industrial and Provident Societies Acts 1893 to 1978.

Lacey intends to appeal to the Supreme Court.