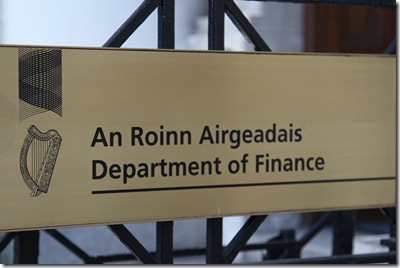 The General Government Debt of Ireland has soared from €144.4 billion (93% of GDP) in 2010 to €166.1 billion by the end 2011 (107% of GDP).  General Government Debt measures the total debt of the State and is used as a comparative measure across the European Union.  But to judge top-level public sector pay in the country one could be forgiven for thinking that the Celtic Tiger is still jiving!

The main story in today’s edition of the Irish Independent (3 Jan 2012) reports a difference of opinion between Finance Minister, Michael Noonan and Public Expenditure Minister, Brendan Howlin about how much the next Secretary-General of the department of Finance is to be paid. Noonan wants to bust the Governments €200,000 per annum pay cap on civil servants because apparently several candidates are ‘put off by curbs on salary and perks’, according to the Independent. Some overseas applicants are skittish about no reimbursement to attend interviews and no relocation expenses. But times have changed in Ireland from the time that the chief executive of an internation charity that raises funds for worthy causes in Ireland could be paid a severance package close to €400,000 and remuneration of over €700,000 while State agencies paid close to €8,000 per table to host a party of ten guests at a charity’s fund-raising dinner.

It is interesting to compare rates of top-level public service pay in Ireland with those in other jurisdictions. The ten highest paid public sector office holders in the United States are:

The Permanent Secretary of HM Treasury is paid within the range €209,000 - €215,000, a rate that takes into account that London is ranked 18th highest in terms of global cost of living.

The recently reported 15% pay cut in 2012 that will save the State €138,000 and the waiving of potentially hefty bonuses by the chief executives of National Treasury Management Agency (NTMA) and National Asset Management Agency (NAMA, Ireland’s bad bank) may seem like an extraordinarily benevolent personal gesture There are 14 executives of NTMA and NAMA in receipt of an annual salary of more than €250,000.

The salary of the chief executive of NTMA will apparently be reduced to €416,500 in 2012, compared to the reported €1 million paid to the post-holder in 2008.  This reduction occurs at a time when Ireland is not fit to be in the bond market, but this level of remuneration is still 215% higher than the combined salary and performance pay of the chief executive of the UK Debt Management Agency who oversees exchequer borrowing that is almost nine times greater than the current record-high General Government Debt of Ireland.  It is also noteworthy that 35% of the British national debt is owing to parties outside Britain compared to 85% in the case of Ireland before Troika package became available, a clear indication of the wealth creation capacity of both nations.

Is there not a case for reintegrating these agencies into the Department of Finance from which NTMA was spawned over twenty years ago and dispensing with remuneration policies and practices that bear absolutely no relationship to the cost burden on taxpayers for similar work in other jurisdictions, or the capacity of the State to pay? A strategic move of this nature would clearly signal the Government's unambiguous priority to make Ireland globally competitive and economically robust.