My contribution to The Irish Times on ‘Renewing the Republic’ 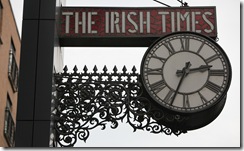 I would imagine that a fundamental and crucial priority of the founding fathers of a newly independent nation is to demonstrate the viability of that long-sought for independence and that its national institutions are sufficiently robust and agile to take care of the basic needs and legitimate aspirations of all its citizens. But perhaps the Irish experience has more in common with the evolution of a family business than with the typical development pattern of an independent nation, if there is such a thing as a typical development pattern.


This would imply that there is a single-minded focus on the progress and welfare of a family business while under the control of the first two generations that wanes with the arrival of the third generation.
If this analogy were to be applied to Irish nationhood would that explain how a State organisation's resources were looted to flatter the vanity of a chief executive who aspired to the lifestyle and acclaim of a medieval aristocrat? Could it account for planning decisions that allowed residential accommodation to be built on flood plains across Ireland that were to become virtually derelict or worthless as a consequence of severe flooding? Would it explain a religious leadership that indulged itself with a veil of secrecy to maintain an existence independent of the nation's laws? Could it account for financial regulators who would tolerate 100% residential mortgages in quantum's that were up to 8 times the income of borrowers? Borrowers in what Donald Rumsfeld calls 'old Europe' can only borrow between 60 and 80% of a home value, as is the case in Germany.


While we recover from the delinquency of a generation of diabolical leadership across a wide spectrum of national power bases, it is also important to realise that the Irish nation has renewed itself many times in its 91 years of independence and will continue to do so - just like a forest scorched by a widespread fire, or when our country was ravaged by famine.


Most of the old rogues in leadership are being disgraced and replaced, some by strangers from another land. Some will hopefully be brought to account and punished in a court of law for their malfeasance. The great imponderable, as we advance towards the centenary of our independence, is whether that renewal can meet the needs and expectations of its citizens. We must never lose sight of the slogan that 'asset values can go down, as well as up' especially when a nation is borrowed to the hilt. There is no preordained certainty that progress is always in a desired positive direction - ask any white Zimbabwean.

Labels: Renewing The Republic of Ireland, The Irish Times