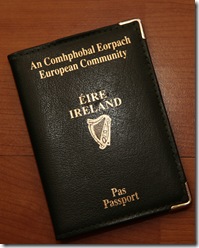 The Civil and Public Service Union, in issuing protective strike notice, better prepare for a long, bitter, costly and intransigent strike if that is where they are headed. No democracy would tolerate a government caving into the anarchy and subversion perpetrated by their members at the Passport Office in recent times. The notion of paying people, who enjoy secure State-guaranteed employment, in full, while their disruption continues is irresponsible and tantamount to the larceny of taxpayers’ money.

The CPSU and their fellow travellers in fantasy-world believe they can, with impunity, inflict gross and intolerable inconvenience and disruption on fellow citizens to avoid pay cuts the cost of which would be paid for by the same people that are waiting in line for hours on end to obtain a passport and through the very great sacrifices of many others who are as brutally squeezed economically as these people.

There is not a segment in our society whose economic wellbeing has not been mutilated by the consequences of appalling economic mismanagement, incompetence and, possibly, criminal behaviour. Is the response of the great proponents of social solidarity now based on the principle that those with the greatest capacity to blackmail and blackguard are to achieve the greatest comparative advantage?

It is high time that the Government realise that they have been elected to govern. That obligation takes precedence over the pillow talk in Government Buildings carried on under the auspices of the social partnership process, an obsolete initiative, that is now simply intended to make unions leaders appear to be effective.

The achievement of a smart, innovative economy requires the enhancement of labour cost competitiveness and improving the ranking of Ireland higher than its current 26th place in the EU-27. That is not achievable on a foundation of workplace chaos, outmoded practices and dysfunctional stunts which are most assuredly the express route to Third World living standards from which it maybe extremely difficult to recover.

In the meantime – the unions’ will decide which Irish citizens can freely travel outside the country and who cannot.  Some of you thought that the 1994 ‘X Case’ which denied a 14-year old the right to travel to Britain to have an abortion and which brought down the Albert Reynolds Government was restrictive.  We are now about to experience the same level of individual freedom as the citizens of North Korea.  To hell with the impact on international trade, employment opportunities outside Ireland, and, of course leisure pursuits.  You will now defer to some dandruff-infested CPSU member who will determine if and when you travel.