“Twaide up to a bigga house” Bank of Ireland 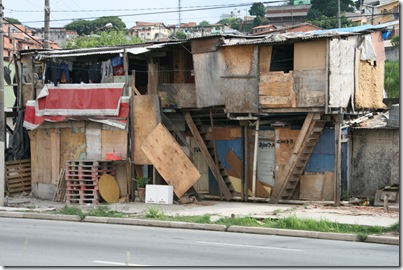 THE other morning I wondered if I had awakened on April Fools Day. it was stills dark as my transistor radio came to life and the morning news reported that the awful devastation from flooding throughout the country was now impacting the capital. Then there was an advertisement from Bank of Ireland Mortgages urging listeners’ “to twaide up to a bigga house”.

I gathered my chattels and then I spotted the house of my dreams, pictured above.  Perhaps I really should escape the park bench,  which is my winter home, having recovered form the symptoms of swine flu and apply to Bank of Ireland Mortgages with my Roma gypsy lover before she starts her 10-hour shift begging from the early morning commuters and offering herself to truck drivers at the Ferryport.

I thought how tuned in Bank of Ireland are to the sentiment of the country. Those that are not bailing out flood water are coping with 413,000 on the Live Register, 12½% unemployment, the prospects of further cuts in income for one reason, or another. Had the captains of finance had become the admirals of empathy, equipped with new periscopes? 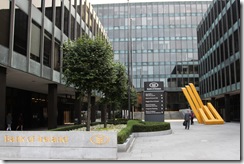 My mind wandered again and I imagined what would Bank of Ireland be like if it were a human being and not a corporate entity. I had this vivid image of an osteoporosis-stricken female in her seventies, who had lost 37% of her bone density, strutting along a beach in The Gambia. Her hair had once been blonde, but now it resembled dry bleached straw under the unforgiving late morning sun. Her heavily tanned body was almost fully exposed as all that covered the critical wrinkles  was a bikini bottom made from dental floss. While her appetite for pleasure and hedonism was infinite her finer assets were no longer as elegant as they once had been. She had seduced an East African migrant, 50 years younger than her, who was a vendor on the beach selling fresh pineapple to tourists. A woman with an established lifestyle of elegance, a wheezing voice and rustic charm, she also had great ambitions for him, her horny, insatiable go-getter. His formal education ended at the age of nine but she envisaged him becoming her house boy at her suburban Dublin mansion, Chew Fatima. His Bermuda shorts would be replaced by tailored trousers and a white Charvais shirt complete with silver plated cuff links. An occasional visit to a barber was intended to make him socially at ease with the the other court jesters already employed in the cellar of the mansion.

The Governor of the Bank, Mr Molloy, appeared in Leinster House last week to brief the legislators about current trends and future prospects. He was accompanied by the young buck his predecessor hired to mind the shop and report the Bank’s losses every six months, most of them attributable directly to himself. Old Mr Molloy has been around for a long time. His value is not just in what he knows but who he knows.  The Long Fellow and The Short Fellow ran the show in Ireland when his career commenced. Éamon de Valera was Taoiseach and Seán T O’Kelly was President and principal kisser of the rings of all bishops’ and whatever other part of their anatomy required soothing.

Molloy described to the legislators  ‘the appreciation’ of the Bank for the ‘significant’ support provided by the people. Allowing for the Doctrine of Mental Reservation the significance of this support is that the people have provided €3.5 billion to a business with a market capitalisation of €1.68 billion. He outlined how the Bank is meeting the needs of Irish customers, business and personal, many of who are skittish about credit availability and the rules and procedures to access same. For the record – the Bank has deposits of €34 billion from Ireland and has loans due from Irish customers of slightly over €62 billion.  They obtain around €53 billion of deposits elsewhere but the Bank is coincidentally curtailing its business activities elsewhere.

I was particularly intrigued by Old Mr Molloy’s remarks about mortgages. The country as a whole owes €147.8 billion in residential mortgages as of the end of October 2009. The Bank of Ireland share of this is €28 billion of which 21,000 of their 196,000 Irish mortgage customers are in negative equity-land. €1.5 billion has been lent in the first nine months of 2009, of which 31.6% went to first time buyers. This implies they lent €1.05 billion to other categories. They consider 350 mortgage applications per week – 18,000 a year who are acquiring properties in flood plains, settlements, townships of more remote fields of thistles – always mindful of the circumstances of the 3,436 individuals who claim tax relief in respect of urban renewal, the 1,149 who claim tax relief in respect of town renewal and, of course, never forgetting the 1,167 who claim tax relief for seaside resorts or the 2,137 who qualify for tax relief in respect of rural renewal.

Mr Molloy saw mortgage trends that no other white man has seen in Ireland this year – signs of an uplift designed to raise the spirit of harassed legislators. This, he said, is reflected in “an improvement in overall applications and drawdown trends compared with previous periods”. Wow!  Could a Nigerian even outclass this man’s supreme optimism?

This is the official position with respect to mortgage approvals and payments in Ireland for the first six months of 2009 compared to the same period in 2008:

I am not really sure what this old man’s optimism is based on.  Perhaps he is thinking of the first year he worked for the Bank of Ireland when 2,000 women in Ireland, who already had 10 children, gave birth to an eleventh.