Begging bowl out at Dublin Docklands 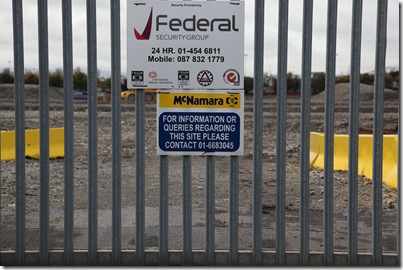 IS it necessary for the taxpayer to invoke the Doctrine of Mental Reservation when reading the recently published 2008 annual report of Dublin Docklands Development Authority (DDDA), evaluating the opaque character of its corporate governance since its inception in 1997 and its overall viability? Its annual report lacks candour. It fails to inspire confidence in its board and taxpayers’ should be alert lest they be plundered to compensate for a disgraceful episode of buccaneering speculation.

DDDA lost €212.9 million in 2008 and its net assets withered from €177 million in 2007 to €26 million in 2008. This did not arise through the diligent prosecution of its corporate mission - to be a paragon of sustainable development in the inner city that would offer a major contribution to the social and economic prosperity of Dublin and the whole of Ireland. But it did occur as a consequence of harum-scarum commercial and residential property speculation that could only have succeeded if potential customers had become submerged with overwhelming and unsustainable debt.

The former city dump at Ringsend was purchased for €412 million in 2006, a price well in excess of what it was professionally valued at that time. This property was valued at €50 million on 31 December 2008, a write-down of 87%. The former chief executive informed an Oireachtas committee in February 2009 the revaluation would be 30% lower than the purchase price – a clear inconsistency within a matter of weeks. He has departed from DDDA but there is no explanation in the annual report of either the circumstances, or the terms, of his departure.

Sixty percent of the Ringsend development was to have been residential with the most basic unit, a one bedroom apartment adjacent to an incinerator and the city water purification facility, purportedly intended to sell for €500,000. The average gross household income of a person(s) with a mortgage in 2006 was €58,190 so a prospective purchaser with a 92% mortgage would be borrowing €460,000, or 8 times income. The 2008 annual report bemoans ‘the huge problems caused to DDDA by the collapse of the property market’. Perhaps it would be more candid and honest to recognise that the final episode of the economic terrorism of the Celtic Tiger had been averted from a consumer perspective.

The 2008 audited accounts for this state agency include a charge of €5.43 million for legal fees. The Master of the High Court consistently criticises lawyers’ costs but there is no indication as to who the recipients of this money are; what the basis for the costs are, or any rational foundation for the taxpayer to see a basis of value for money. Given that there are reputedly 800 unemployed solicitors and presumably a proportionate number of under-employed barristers, this is a very large unexplained cost incurred by an agency that has never winced when it comes to throwing money around.

The board of this agency has failed its stakeholders, gambled its resources and lost. The chances of DDDA ever accomplishing its original mission are as probable as me becoming the Mayor of Monte Carlo. Does the Minister for the Environment, Heritage & Local Government intend to declare this a failed agency and close it, or is this to become another example where speculative profits are the trophy of speculators’ but uninsurable risks and the flotsam and jetsam associated with these, are the burden of taxpayers' while they distract themselves planting bluebells?