Are Irish banking predators about to become scavengers in the ‘cash for thrash’ market? 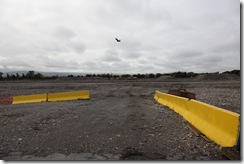 The former chief executive of Bank of Scotland (Ireland) Limited, Mark Duffy and a business partner, Kevin Warren, intend to pirouette, like an obscure phoenix in the autumnal sky, to buy property loans in Ireland and elsewhere from Ulster Bank and other foreign banks operating in Ireland, but not covered by the proposed National Asset Management Agency.  These two have apparently raised €3 billion but it is not clear from whom this money is raised or what the expectations are of those who own it.

Duffy had been employed at Bank of Scotland (Ireland) Limited until February 2009.  When he left BOSI his Chairman, Maurice Pratt, the former supermarket chief and soft drinks bottler,  indicated that Duffy had been in discussion about his departure since the end of 2008 and that BOSI “fully understood and respected his decision”  to go and his chairman wished him “well in whatever future challenges he decides to pursue”.

A predecessor of Pratt, as Chairman of BOSI, was Phil Flynn.  Flynn was cited in the money laundering case involving Cork based financial adviser Ted Cunningham. Cunningham was convicted of laundering €3 million of the proceeds of the £26.5 million robbery from the Northern Bank branch in Belfast in December 2004 and he described Flynn in court as “the boss behind everything”.

Many observers point the finger very firmly and directly at Duffy and Bank of Scotland (Ireland) Limited for the toxic over-lending that was the precursor to the current crisis in residential mortgage lending in Ireland.  Residential mortgages now stands at €148 billion, a product of banking practices that were neither provident, prudent and was passively overseen by a ‘mom and pop’ regulatory system that had as much impact as a police riot squad wearing pink bedroom slippers – but it did secure some post-tenure banking directorships for those in control of it.  BOSI has 34,000 mortgage customers in Ireland.

When Duffy spoke a meeting of Dublin Chamber of Commerce in September 2004 he said “The dynamics of the Irish banking market are undergoing a sea change at the moment.  BOSI has already shown the benefits of competition to the customer, and a real challenge to the cosy club of the traditional banks is underway".   The flea was going to tickle the elephant.  The entire herd stampeded and became chronically dysfunctional, unable to sustain an appropriate capital base without crawling to the State.

Duffy stated at the time he left BOSI in 2009 that “it was a natural point at which to leave” coinciding with the sale of HBOS to Lloyds and what he described as the “success of the Halifax retail project in Ireland”.

Is there clear and compelling evidence that the Halifax retail project in Ireland is a success? Lloyds, which is 43% owned by the British Government, has invested €1.45 billion to augment the capital of Bank of Scotland (Ireland), owner of the Halifax operation in Ireland.  It does not intend to sell any distressed assets to the Duffy-Warren outfit.

The Irish public will take a close and detailed interest the challenges Duffy and his friend now intend to pursue and they will be interesting to ascertain if what they observe will be predators who have become scavengers.

The sooner the Central Bank of Ireland takes all of these pathetic banks by the scruff of their scrawny necks and puts manners on them the better.