Time for The Public Accounts Committee to make its mark

I listened to a recording of this interview this evening. Saul was at pains to point out that the Audit Committee conducted its role vigorously but were impeded and frustrated by the leadership of the agency, as was the Public Accounts Committee. The Audit Committee were presented with 22 complaints against the Internal Audit team, none of which were upheld. The Audit Committee may have conducted its affairs with textbook perfection but the hidden hand of vested interests lurked persistently in the twilight until the C&AG shone a penetrating light into the murkiness the debacle in April 2008 and, again, in June 2009.

The FÁS controversy was exposed by the Sunday Independent and that publicity was the catalyst for the urgency of resolution. The preliminary comments made by Rody Molloy, on this day twelve months ago, are interesting to revisit in the light of what is now known. Molloy stated then that “FÁS is not a perfect organisation” and “unfortunately, the internal audit reports released by us under the Freedom of Information Act have been sensationalised by the media and used by some with a destructive agenda towards FÁS”. While Molloy stated that he recognised the efficacy of the audit function he also expressed concern “that anything written will be used by persons outside the organization with a negative agenda” and that “if these reports were released into the public domain they could be damaging to the organization”.

Did he not consider that the media would have no credibility if damaging insinuations had no real substance? These were surely the comments of a person whose own organisation was imploding under him and who had isolated himself to the point of downfall. The C&AG Report has borne this out, not the use of the word ‘entitled’ in place of ‘eligible’.

But these comments also offered a rich insight into the culture of FÁS – an agency whose scope and budget had grown so much that a great many more snouts were feeding at its trough than was ever envisaged. The Prime Time investigation into meals-on-wheels in Castlebar did not inspire optimism that all the effort and expenditure was wise, prudent and appropriate. The importance of an organisations culture should never be underestimated. It is culture that facilitates change; guidelines incur inertia.

The persistent use of the legal fig leaf by other FÁS contributors to The Public Accounts Committee was another symptom of a death rattle and reminded me of the defenders of the ‘B’ Specials police reserve in Northern Ireland decades ago.

Mirror, mirror on the wall,
Who is the fairest of them all?

It was the same newspaper that blew the gasket of the DIRT controversy, submerged since 1991, with a headline on 5 April 1998 ‘AIB Had £600 million in “Bogus” Accounts’. The role played by the Public Accounts Committee in the 1999 – 2000 Parliamentary Inquiry into DIRT was pivotal in charting a new direction with respect to this particular issue.

The economic, social and political impact of the DIRT Inquiry was comparable in scale and importance to a grand slam rugby victory.

One constituency embraced radical change because they felt they had no other choice – their survival was at stake. The game changers were The Revenue Commissioners. Not alone did they eventually collect hundreds of millions of euro due in taxes, interest and penalties, but a new generation of competent leadership successfully reformed their own organisation. Reform did not come easily, nor did it come quickly. It came with painstaking effort - but it came and it endured.

The other constituency – the banks did not fundamentally change because those in charge believed that change and reform was beneath them. They knew they were systemically important. They also knew their influence could prevail against all comers in most circumstances. Why else would they have overcharged customers with impunity?
They, of course, paid whatever they were obliged to pay and complied, in certain respects, with other mandatory matters.

But the fundamental self-serving, obscenely remunerated culture prevailed because nothing impacted on them personally to make change happen or threaten their personal status or income until they scuttled the economy last year. Four of them were so nonchalant that they were cited for personal income tax evasion by The Revenue Commissioners on 28 March 2006. Reform, it seems, was only for the ‘little people’. Their legacy is now overwhelming.

Taxes and penalties amounting to hundreds of millions of euro were recovered by the Revenue Commissioners, whose own organisation was radically overhauled and invigorated to make it fit for purpose and recognised as such across the world. The DIRT Inquiry did not, unfortunately, lead to a a similar cultural renaissance in the banking system, where rampant overcharging of customers and shoddy standards became endemic and some of whose senior executives were cited for personal tax evasion by the Revenue Commissioners in March 2006.

Much has been made of the Department of Finance Guidelines with respect to the retirement terms of Rody Molloy. These Guidelines were created in 1998 by John Hurley, the retiring Governor of the Central Bank. They were intended primarily to deal with circumstances in State bodies where chief executives were recruited on fixed-term contracts. Their purpose was to establish clear and consistent maximum limits on the pension and lump sum payments that could be provided to a CEO who was either retiring at the natural conclusion of a contract or was retiring prior to that at the request of his board for relatively benign reason – such as a desire for a change of leadership, or direction at the agency concerned.

A person who voluntarily retires does not qualify for these arrangements. Alternative arrangements are in place for younger retirees.

The Guidelines particularly stress that the board of a State body is free to apply lesser benefits or not to apply early retirement benefits at all. Bearing in mind the Guidelines were created to deal with benign circumstances the example of a board desiring to reappoint a chief executive to another fixed term as an instance where such additional benefits would not be offered, is cited. There is no reference in the Guidelines to retirements in controversial circumstances, which is not surprising. 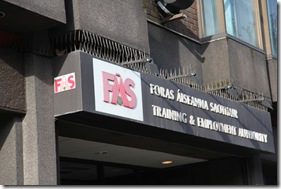 Where does this leave the Public Accounts Committee in its deliberations with respect to FÁS? The side issue of the company Audi has surfaced but this matter, which is now to make its fifth appearance before The Public Accounts Committee since 2 October 2008, has ramifications that transcend FÁS. Their deliberations will have a profound impact on the entire State sector.

The implications of the recent retirement of Paul Moloney as Chief Executive of Dublin Docklands Development Authority have similar, but unascertainable and potentially serious implications, when the details of the transactions involving Anglo Irish Banks and the Irish Glass Bottle Co site are disclosed. Moloney held this position since 2005 having worked previously with Dublin City Council. His appointment to the Authority was blessed with superlative tributes by then Chairman, Lar Bradshaw, who was to resign from the board of Anglo Irish Bank last December, along with his close friend Sean FitzPatrick.

The entire State sector is observing unfolding developments closely to glean what the consequences of the C&AG examination are. They are also closely watching how Sean FitzPatrick deals with his debts due to Anglo Irish Bank and whether the Minister for Finance is kept appropriately abreast of developments by those acting in the public interest.

If there are no apparent consequences, apart from the thrashed reputations of the institutions connected FÁS and the burden that is borne by those who represented these institutions together with the personal distress that Molloy must inevitably endure, then a damaging vacuum is established. How is it possible to clearly identify the boundaries of what is acceptable and what is not acceptable when standards fall well short of acceptability and serious damage ensues? If the boundaries are unclear, or there are no boundaries, the State sector will convulse itself to avoid ignominy - but will probably do so in a manner that is ineffective and at a cost to its own productivity, agility, sense of integrity and effectiveness.

If there are no consequences, how can the characteristics of stable governance with integrity and commitment flourish in any State agency? Mr Saul confirmed that the procedures and protocols in FÁS. That is the case in most public bodies. Paper doesn’t refuse ink ~ but it is the culture , dynamism, passion and energy of an entity that makes things happen –for better, or worse.

The deliberations of The Public Accounts Committee could therefore result in another ‘grand slam victory’ and have a profoundly positive impact as a consequence of this crisis if the outcome successfully redefines and refocuses FÁS and individuals emerge of the calibre and ambition of those that emerged in The Revenue Commissioners a decade ago. FÁS has been a major by-product of social partnership. Social partnership could also get new life and sense of purpose but the fuel to ignite that will not be found in damp deadwood hidden behind legal fig leafs.

It would, on the other hand, be most disappointing if the enduring outcome of The Public Accounts Committee was merely to record the frustrations, impediments and difficulties in conducting its examination of this matter the only practical outcome is one of Plus sa change, plus c'est la meme chose.