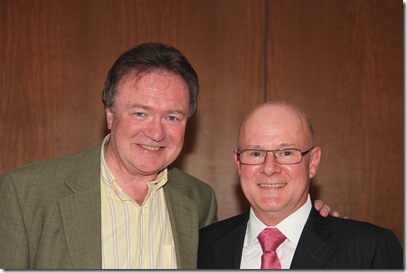 Brendan Rossiter (right) retired from IDA Ireland on 30 June and a reception was held in his honour on 6th August at the agency’s headquarters in Wilton Place, Dublin.

Brendan served the agency for 32 years and he spent almost 14 years overseas.  He had two assignments in Tokyo, one as Director of Asia Pacific and he was also Director Europe based in Frankfurt and, more recently, in London.

A keen opera buff, an astute gardener and an enthusiastic tennis player  with an innate curiosity about all the places he lived in, Brendan made the most of his opportunities to pursue these experiences to the fullest possible extent.

He was hugely respected by his colleagues and clients.  Brendan was regarded as an exemplary professional in the challenging world of promoting foreign direct investment into Ireland