Irish railways in the 19th and 21st centuries

DUBLIN-bound commuters have to cope for the next three months, or so, with service disruption caused by the collapse of a railway viaduct at Malahide last week. This 19th century edifice over the Broadmeadow Estuary will disrupt an estimated 50,000 commuter each day. 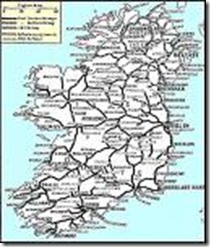 The era of mass transport in Ireland based on railways began in 1834, more than a decade prior to The Great Famine and reached its peak in the mid 1920’s. The system was reduced to a shadow of its original scale by the early 1960’s when the total population of the country sunk to its lowest level in history.

Ireland’s first railway service between Dublin and Dún Laoghaire in 1834, eight years after the inauguration of the first rail route in England between Liverpool and Manchester. The terminus was located at what is now Salthill station until 1837 due to local opposition to the development of what is now Dún Laoghaire station. 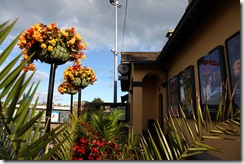 The population of what is now the Republic of Ireland, when the railways were inaugurated, was 6.5 million but this declined to 2.9 million in 1926 when the success of the railways system began to wane. Ireland’s population reached a low point in 1961 when it dropped to 2.8 million, before recovering over the past 15 years to its current level of 4.2 million. 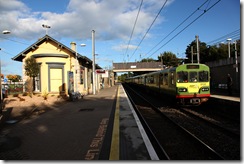 When the railway enterprise commenced in 1834, 15% of the country’s population resided in the counties that now constitute the Dublin commuter belt – counties Dublin, Meath, Louth, Wicklow, Kildare and Carlow but, of course, there was no such thing as commuting then, nor had breakfast-roll-man existed! The Dublin commuter belt today contains 43% of the country’s population.  The building on the left is Dalkey Station, opened in the 1850’s.

The decline and recovery in population numbers is summarised in this table:

The development of the leading railway companies reflected this:

There were other independent railway routes between: 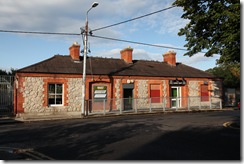 The system operated 5,500 kilometres of track in the 1920’s and apart from passenger traffic, they served a vital function in moving goods to ports for transhipment abroad. The building photographed on the left is Glenageary Station, where my own daily commute starts and ends – not always in sunshine!

The railway companies were merged into Great Southern Railways in 1925 and amalgamated into what was to become CIE in 1945. 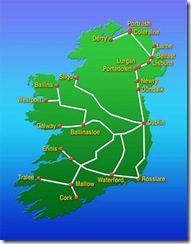 The modern railway system in the Republic of Ireland consists of approximately one-third of the peak capacity in terms of track length. The mainline service links Dublin with Wexford, Waterford, Cork, Tralee, Limerick, Galway, Sligo and Belfast. The former Dublin – Navan route is being redeveloped as are the city services in Dublin, Cork and Galway.

This is taking place against a population profile that is radically different than that of pre-Famine Ireland, as illustrated in the following table, measuring persons per square kilometre:

Some of the magic of the old railways is kept alive by the West Clare Railway who have run the old locomotive over a stretch of the old route. The Railway Preservation Society of Ireland, based at  Whitehead, Co Antrim organise steam train trips from time to time.