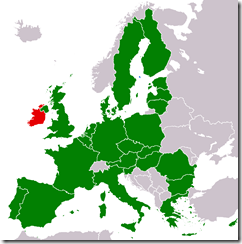 THE SECOND Lisbon Treaty Referendum is to take place in Ireland on Friday 2 October and the Irish business lobby is among many interests that are pressing for a YES vote.  The latest to enter the fray is Jim O’Hara, General Manager of Intel Ireland, who argues that passage of the Referendum is ‘good for business, jobs, investment and, as a consequence, prosperity’.

Presidential assent has been granted in Germany following very strong support for the Treaty in the Bundestag and Bundesrat.  The Chamber of Deputies and Senate of the Czech Republic supported the Treaty in February and May 2009.

Outcome of 1st Referendum in Dublin

The voters of Dublin cast 209,275 votes for YES and 217,942 votes for NO in the first referendum.  The overall turnout from the electorate of 784,699 was 54.6%.  The turnout in the European Parliament Election on 5 June 2009, 407,404 was slightly lower than the 427,217 votes cast in the first Lisbon Treaty Referendum. Six of the eleven Dublin Dáil constituencies voted in favour of Lisbon last time.

Rejection outside Dublin was greatest in:

Dublin - North of the Liffey

Dublin - South of the Liffey

The business lobby in Dublin

69.4% of all the directors listed at the Companies Registration Office in Dublin are resident south of the Liffey, principally in the constituencies of Dublin South-East, Dublin South and Dublin South-Central.

The 30.6% resident north of the Liffey are predominantly in Dublin West and Dublin North-Central.

What impact will economic developments since June 2008 have on the outcome of the second Referendum?

The retail sectors showing the most dramatic downturn are: