Powerscourt Demesne thrives on its renaissance 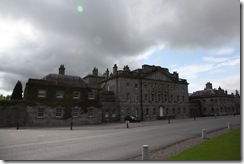 I SPENT this Sunday morning pottering around Powerscourt Demesne at Enniskerry Co Wicklow with my camera. The was once the ‘Big House’ of the Viscounts’ Powerscourt, whose family name was Wingfield.

Ten individuals have borne the title Viscount Powerscourt, the current holder being Mervyn Niall Wingfield, born in 1935. Their family estate at one time consisted of 49,000 acres of land, 36,700 acres of it in County Wicklow. The rental income from this land provided the wherewithal to construct and develop the Demesne and its surrounded by 850 acres.

Today, the Demesene is home to the Ritz Carlton Hotel, Powerscourt Golf Club and a thriving restaurant, garden centre and retail outlet operated by Avoca Handweavers.

The early 1700’s were an era of great confidence in Ireland. The parliament building at College Green was opened in 1739 and remained the country’s parliament until the Act of Union in 1800. The construction of Big Houses continued until the middle of the 19th century. 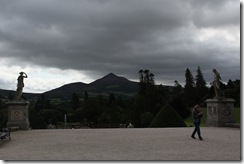 The Demesne is located in a unique setting with the Sugarloaf Mountain overlooking it from not too far away. The Italian-style garden next to Powerscourt House was designed in 1842 and took 20 years to develop from 1860 to 1880. The 7th Viscount Powerscourt was the prime mover. He was only seven years old when his father, the 6th Viscount died in 1844 at the age of 30. The 7th Viscount travelled extensively, when he was old enough to do so, to gather inspiration for his garden. His travels took him to Versailles, Schönnbrunn Palace in Vienna, the royal residence of the Hapsburg monarchs and the gardens at Schwetzingen Castle which were laid out in the second half of the 18th century. The two winged figures in my photograph are of Fame and Victory. They were made in Berlin in 1866. This garden is considered to be the last specimen of an aristocratic garden in Europe and it was developed at a time when landscape architects had possibly more influence than artists or architects. The unique characteristics of it are the triton fountain which spews water 100 feet high, the wrought iron gates, pebbled paving, the classical statues and the careful location of trees.

The post-Famine period in Ireland from 1850 to 1870 was the era of the grandmother of the late lamented (or should I day demented?) Celtic Tiger. Post-Famine rents were higher by 20-30% and paid on time. Arrears that occurred during the Famine were paid off. Property values increased and land became a very acceptable collateral for loans. The Disestablishment Act of 1869 resulted in the Church of Ireland receiving compensation of £8.5 million and it lent £3.5 million of this to 120 Irish landlords. The Catholic Church got in this too when Maynooth College received £369,000 and lent £315,000 of this to seven landlords.

Farming was profitable at the time and large landlords embraced new farming practices. The lifestyle of the Powerscourts’ in the mid 19th century was therefore one of indulgence, exclusivity and abundance . 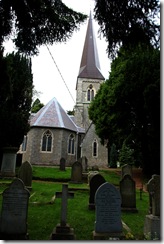 The Protestant population of Enniskerry attended church in the grounds of the Demesne until 1859 when the Powerscourt family decided to build St Patrick’s outside the Demesne because of the loss of privacy.  The tethering of horse on the tress of the Demesne and the parking of carriages in the yard of the House became an irritant!

Walking through the church graveyard this morning was like taking a tour through recent Irish economic history as I notices the graves of individuals such as Sir Basil Goulding and George Crampton.