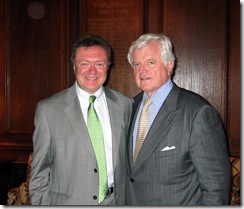 THE morning that the death of Senator Ted Kennedy was announced my eldest daughter discreetly asked me “was he a brother of JFK”?

It is easy for those of us who lived throughout the Kennedy era to recall all the germane details of the Kennedy legacy, but if you were born 13 years after the assassination of President Kennedy, perhaps you could be excused for not being quite on top of all the details.

Ted Kennedy was one of the most inspiring political leaders of modern times; a leader who could combine passion with vigour and a capacity to achieve landmark outcomes. He was a senator since he turned 30 years old in 1962 so his political career crossed many generations.  Harold Macmillan was Prime Minister of the United Kingdom when Ted Kennedy became a senator

The Kennedy legacy made its debut in Ireland with the visit of President Kennedy in June 1963, but this was preceded and by ‘look and see’ visit here by Ted Kennedy. The JFK visit was the first-ever by a serving US president but its significance transcended that. The television service in Ireland for just two years old at the time and the coverage of the visit under the direction of Tom Hardiman, then Head of Engineering at RTE was a significant challenge.

JFK was able to use television to its fullest possible extent to enable his wonderfully articulated messages reach the hearts and minds of the widest possible audience. The President’s party were greeted at Dublin Airport by a then ageing Irish Cabinet, most of whom had been active in politics since the founding of the State, 41 years earlier, but were now at the sunset of their careers. The Kennedy era was in its infancy and everything not just seemed possible, but probable.  His charm, charisma and elegance was unprecedented – a family trait!

Their grandparents had been Famine emigrants in 1848. When I lived in Boston I was fascinated to discover that no less than 50,000 Irish arrived at the shore of Boston Harbour in 1849, at a time when the population of Boston was just 115,000 people – almost similar at that time to the population of County Leitrim which has 112,000 residents – but now only has 28,950. The population of Dublin at that time was 405,000. Ireland had a widely dispersed population of 5.1 million in 1849 – almost as many as there are now in Massachusetts.

I felt many ‘virtual links’ with the Kennedy enterprise ever since. I was in North Truro on Cape Cod when the tragedy involving Senator Kennedy and Mary-Jo Kopechne occurred at Chappaquiddick in July 1969. I was a student in Trinity College Dublin when Senator Kennedy spoke in the Examination Hall about Edmund Burke, the 18th century politician whose efforts led to the founding of the College Historical Society in 1770.

My dear and closest friends in Boston and I were regular visitors to Kennedy-related venues during the five years I lived there. These included the magnificent JFK Library at Columbia Point, the Harvard Kennedy School, where the great and the good of the universe were invited to speak to the world on matter of the utmost importance. And there was the former family home at 83 Beale Street Brookline.

I heard Senator Kennedy speak on several occasions in Boston, sometimes alongside other distinguished luminaries such as Senator John McCain and Senator Evan Bayh. Bayh’s father, Birch Bayh, preceded Dan Quayle as Senator for Indiana from 1963 to 1981. He entered the Senate a year after Senator Kennedy and was with him in a small aircraft that crashed in Springfield Massachusetts in June 1964. He was a participant in every significant election campaign in Massachusetts.

I particularly remember his efforts on behalf of Shannon O’Brien, the candidate and opponent of Mitt Romney for the post of Governor of Massachusetts in 2002. Kennedy has been a vigorous advocate of hers.  But O’Brien’s political star imploded on live television when she as asked by the late Tim Russert of NBC whether the parents of a 16-year old should be informed if that youngster were to have an abortion. O’Brien had been a favourite to win until she fudged the answer to that question and ended up with just 45% of the votes.  Massachusetts ended up with Mitt Romney as Governor for a one term.

I was especially impressed with the single-minded passion and commitment of Ted Kennedy to the issues he believed in. Many like him would have been happy to coast along on the angel-dust of the family legacy, but not Ted Kennedy. He had an enormous capacity for empathy. This was abundantly displayed many times, but especially at times of tragedy.  His eloquence in December 1999 at the funerals of six fire fighters from Worcester Massachusetts who died in the course of duty must have been a great comfort to those left behind.  When someone close dies, part of you dies with them – but part of them continues to live in you.

I had the honour of meeting Senator Kennedy at the Harvard Club in Boston in June 2005 before I returned to Ireland. He reminisced about his brothers that day.

The Irish media recognised what a good friend he had been to this country.  He took risks when risks were necessary.  He could retain his patronage when that was appropriate.

During  my time in Boston a beloved Massachusetts congressman of 28 years standing passed away after an illness.  His name was Joe Moakley and he, too, had an Irish background.  They said of Moakley “he never forgot where he came from”.  The same can be said of Ted Kennedy.  That unique baritone voice of his will echo for many a year to come.  May be rest in peace.