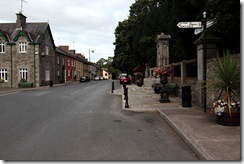 I ’VE been enjoying the second of two weeks away from the day job in reasonably mild and agreeable Irish weather.  Yesterday I escaped from the Ross O’Carroll Kelly caricatures that populate The Pale and spent the day in County Monaghan.  I believed that there were no exquisite hospitality venues in Ireland that I had never experienced but I had never been to Castle Leslie in Glaslough Co. Monaghan. It was built around 1870 when the population of Co Monaghan was 115,000 persons.  Its population today is shy of 56,000.

The Castle, set in 1,000 acres overlooking Glaslough (Green Lake),  was the venue for the wedding reception of Paul McCartney to the demure and effervescent Heather Mills in June 2002.  Their subsequent parting was so ugly, bitter and coarse that I had actually thought their nuptials had taken place much earlier than that. 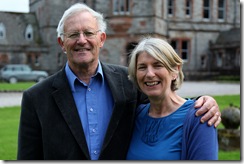 I had arranged to meet my cousin Peggy and her husband Maurice for lunch and the venue selected was The Hunting Lodge at the Castle.  To say that I was pleasantly surprised would be a gross understatement and I am not a person that is easy to please.  This is one of Ireland’s top class hospitality venues that manages to coalesce elegance, modern standard, tasty rations and traditional elegance.  Every facet of the place impressed me enormously.

This is certainly not an emulator of certain Dublin 2 hotel which flies a national flag that is so filthy as to almost convince one that it is used after dark for animal bedding during the breeding season.  Of course, if the flag outside the door of a hotel is so grossly  disrespected -  what is that likely to say about all the other standards at such a hotel?  Could a guest really expect the bed linen to be cleaner than the national flag?

The Irish Hotels Federation have stated that the hotel industry in Ireland is overwhelmed by overcapacity and that an average of 47% of all rooms are vacant every single night.  But the Castle Leslie complex is in a league of its own.  It is clearly under the direction of an owner who is inspired as well as being visionary.  To put it simply, it is ‘the real McCoy’!

Castle Leslie would have been known as one of Ireland’s Big Houses.  These Houses were typically set at the end of an avenue and usually had extensive stables, a very large farm and gardens which imbued them with the self-containment of a remote island.  The era of the Big House was effectively over by the 1870’s at which stage there were, perhaps up tot 2,000 of them in Ireland.

Sir John Leslie built Glaslough at that time to mark his elevation to the baronetcy. He continued to live there until 1906 when he and his wife retired to London.  The papers of Sir Shane Leslie, the 3rd Baronet, state that country life was entirely organised to give nobility, gentry and aspiring-gentry a good time! The Leslie family were one of the largest land-owning families in Ireland in the 19th century.  They owned almost 50,000 acres in seven counties – Donegal, Down, Fermanagh, Meath, Monaghan and Tyrone.  Their largest estate was in Co. Donegal and consisted of 28,827 acres that included St Patrick’s Purgatory in Lough Derg, which remains a Catholic pilgrimage venue.

The Leslie’s were related through marriage to some of Ireland’s most prominent families, including the Marquis of Waterford, the Earl of Portarlington.  Sir John II married Leonie Jerome, the daughter of a wealthy American newspaper owner.  Through this marriage, the Leslies became related to the Dukes of Marlborough.  Leonie’s sister, Lady Jennie Churchill, was wife of Sir Randolph and mother of Sir Winston Churchill. 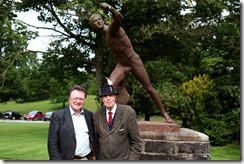 I had a brief chat after lunch yesterday with Sir John Leslie, 4th Baronet, also known as Jack (the guy with the feather in his hat).  Now, 92 years old, he reminded me of his interest in night-clubbing!  He is a first cousin, once removed, of the former British Prime Minister, Churchill and celebrated his 85th birthday at a nightclub in Ibiza.  He lived in Italy for a number of years and spent five years as a POW in the last World War.

His father, Sir Shane Leslie the 3rd Baronet, became a Catholic and had a diplomatic career as an aide the the British Ambassador to the US during World War I.

If Glaslough is County Monaghan’s hidden gem, Castle Leslie is its hidden diamond with the clarity, carat, colour and cut that gives it an enduring brilliance and special sparkle!

Monaghan formed part of the ancient territory of Oriel and was dominated by the Macmahon Clan before the British took it over in 1589.

The other landed estates in County Monaghan included Dartrey Castle, the home of the Dawson family. Thomas Dawson, a Whig MP for Monaghan was made Viscount Cremorne in 1775. The Castle was demolished in 1950.

The Rossmore Estate in 1790 comprised 11,960 acres all centred on the town of Monaghan. This estate belonged to the Blayney family after whom the town of Castleblayney is named. Rossmore Castle was constructed in 1827 by the 3rd Lord Rossmore. The castle was vacated by the 6th Lord Rossmore and his family after World War II due to dry rot and decay. The family moved to Camla Vale within the estate grounds and purchased this property from the Westenra family. The castle was demolished in 1974.  An older estate is County Monaghan is that of Hilton Park in Clones.  Now, in the hospitality business under the management of the 9th generation of the Madden family, Hilton Park was built in 1734 – around the same time as the Powerscourt Demesne in Enniskerry, for the Madden family.  It originally had 8,193 acres attached to it.