Mortgage and residential meltdown in Ireland 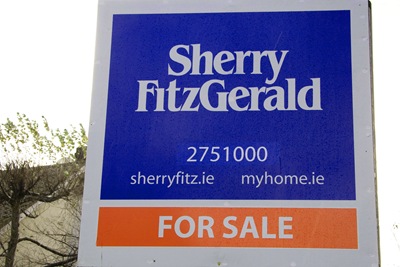 THE Irish housing market is dead.  The coroner found that a surfeit of 100% and in some instances 100%+ mortgages combined with loans based on ridiculously small income levels to purchase in thistle infested meadows of Ballygobackwards hastened its demise.

The flies are even ignoring its decaying leprosy-stricken corpse.  Stamp duty receipts of €729 million to the end of October are down almost 49.8% compared to a year ago.

The Interim Results from Bank of Ireland for the 6 months ended 30 September 2009 confirm that of the 196,000 residential mortgages it has in the Republic of Ireland, 21,000 of these relate to properties with negative equity involving a quantum of €731 million.  But just 14 properties were repossessed in the six months to September compared to 5 in the previous six months. Impaired residential loans increased by 49% to €342 million during the reporting period.

The majority of recent mortgagees are therefore, at best, on life support. bewildered by the force of negative equity and unprecedented unemployment levels, wage cutbacks and a collapse in consumer sentiment. The prospect of massive mortgage defaults and repossessions cannot be ruled out.  The mortgage sector is moribund and the blame for this can be laid, in the first instance, at the door of the Central Bank of Ireland whose impact on the economic wellbeing of Irish citizens has been as robust as that of  Mikado, Kimberly or cocoanut cream biscuits  on human nutrition.

Torrential rain is falling heavily on the parade of maudlin politicians, buccaneering developers and the predatory clown princes and princesses of the Irish banking sector whose malignant vanity and bonus-hunting culture has metastasized the entire Irish economy for at least a decade.  These preening, duplicitous, preening bastards flooded this country with 100% mortgages and are now out to scavenge flesh off the economic corpse.  The income of the average residential mortgage holder is under €58,000.  The size of the average Irish mortgage is €271,000 – a mortgage-to-loan ratio of 4.7:1. 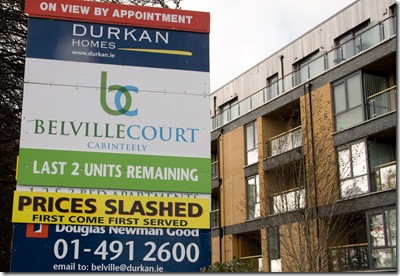 The Monthly Statistics of September issued by the Central Bank of Ireland reveals that residential mortgage lending for September declined by €14 million and that September was the sixth consecutive month of decline.  However, when one considers that the total value of residential mortgage debt outstanding is close to €148 billion a drop of €14 million is hardly a drop in the proverbial bucket.  Furthermore, a declining trend over the last six months is a function of how derailed the housing market in Ireland has become rather than a mark of prudence and stability.

Ireland  has been bewildered with the consequences of toxic debts of the supply side of the construction industry and the passage of legislation to create the National Asset Management Agency to deal with this at enormous cost to the Irish taxpayer. But a significant proportion of Ireland’s 480,000 mortgagees are under enormous personal pressure to maintain repayments of mortgages on houses that are experiencing the consequences of crushing negative equity.  The New Year may herald a tsunami of repossessions and mortgage defaults of an unprecedented scale.  An analysis of mortgage patterns through the EU-27 and the 16 members of the euro currency zone illustrates the appalling extent that Irish citizens were thrown to the predatory wolves by their own Central Bank.

Mortgage liberalization was essentially about letting mercenary yahoos take control while the Central Bank scratched its crotch.  The past 20 years was characterized by a very substantial increase in housing credit that was facilitated by ‘innovation’ in the Irish financial sector.  Mortgage lending was traditionally determined by the basics – disposable income, prevailing interest rates and prudent lending practices based on the deposits of savers.

Formal indicative guidelines on bank lending and the allocation of credit to the private sector were ended by the Irish Central Bank from the 1980’s.

Ireland and other € countries

The 16 central banks of the €-zone countries face similar constraints insofar as none of them determine local interest rates.  But Ireland has managed to increase it mortgage debt, per capita, from €5,650 in 1998 to €32,200 in 2007.  Expressed a percentage of GDP, residential mortgage debt in Ireland increased from 26.5% in 1998 to 75.3% in 2007 and will be even higher in 2009 given that GDP will contract and residential mortgage debt has increased by €9 billion since 2007.  The stock of housing units in Ireland has increased from 1,173,000 in 1998 to 1,883,303 in 2007 but many of these are located in remote and inconvenient places in incomplete housing estates.  Does this not suggest utter dereliction of responsibility on the part of the Central Bank of Ireland?

The residential mortgage debt of The Netherlands is equivalent to 100% of GDP.  But the owner occupation rate there is only 54% but this has increased from 43% in 1983.  Like Ireland, Holland experienced a sustained period of house price increases.  This occurred between 1996 and 2001.  Since then prices have risen at a more moderate pace – 4%-5% per annum.

The Dutch authorities introduced a Code of Conduct for Mortgage Lenders in 2007 that has led to a considerable tightening up of the lending criteria by limiting lending at high loan-to-value ratios and putting a ceiling on mortgage-to-income ratios.  Should the Irish Central Bank follow suit, or do they care?  The new Governor will have to transform the Central Bank quickly and successfully if there is to be any chance change for the better.