Pathetic half-year at Bank of Ireland 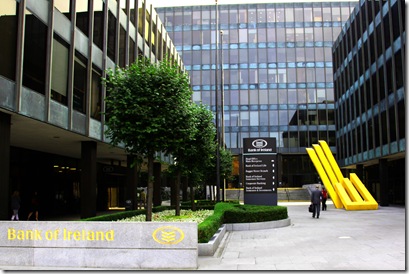 THE Interim Report of the Bank of Ireland for the six months ended 30 September 2009 provides the first public insight into the stewardship of chief executive Richie Boucher, the insider chosen by the Court of Directors, to be chief executive last February.  The results will do little to fortify shareholders or inspire taxpayer confidence either in him, or in the Court of Directors that selected him

The accompanying presentation includes many expression in pidgin English including the mandatory crap about the ‘challenging operating environment’ .  Do these morons’ ever acknowledge that ‘outlook’s’ are always ‘challenging’.  ‘Challenge’ is the essence of the free market environment.  Competence to challenge effectively and successfully is the elusive ingredient that separates the reassured performer from the fly-by-night chancer.

The leadership of the Irish financial sector are the authors and architects of that operating environment and they are now its pall bearers.  Ego-centricity, insatiable greed and unadulterated hypocrisy are their defining features of those who kicked and mutilated all vital economic organs of Irish society.  They were as content seeing house buyers ripped off over the past five years as they are putting their snouts into the taxpayers’ resources to compensate the venality.

The word ‘challenging’ should be left to Mr Barrington and his colleagues on the board of Aer Lingus while the financial sector could usefully use the word consequences much more extensively instead. The ‘good businesses’ and ‘resilient business models’ of Bank of Ireland are mentioned several times.  But is there anything that is either ‘good’ or ‘resilient’ about these results?  Perhaps the expression ‘delusional’ would have been more honest.

The slogan that really piqued by curiosity was “we are committed to achieving more conservative balance sheet metrics”.  Perhaps someone who has contacted a sexually transmitted disease is just as similarly to say “I am committed to achieving a more sustainable and defensible lifestyle and I promise not to continue infecting innocent people”

These results are the first instalment of the Boucher legacy. Are any further instalments necessary?

Boucher was in charge of Retail, Republic of Ireland since November 2005 and he flooded the supply and buy side of the property sector with credit.  This Division returned a loss of €655 million against a divisional income of €720 million.  Chief executives in the US and other markets who return results as appalling as these are typically fired before they even reach the public domain.

Ireland accounts for €34 billion of the €87 billion in the Bank.  Loans to Irish customers in the most recent six months totalled €62.4 billion and the total loan book was  €135 billion.

The market capitalisation of Bank of Ireland is in currently in the region of €2 billion.  This compares to the €3.5 billion provided this year by Irish taxpayers to shore up a rapidly eroding capital base.

Bank of Ireland Life actually returned a profit of €57 million in the six months to 30 September 2009.  The person in charge of this was Des Crowley who preceded Boucher as Head of Retail in Ireland.  He has not taken over Boucher’s poisoned retail chalice.

There has been a long-standing policy at Bank of Ireland that executive directors would over time build a beneficial share ownership in Bank of Ireland equivalent to 100% of salary.  The following summarises the extent to which this policy has been executed.

Soden was group chief executive from 1 March 2002 until he abruptly resigned  29 May 2004 after it was discovered that he was trawling the web sites of escort agencies in Las Vegas on his office computer.  Soden earned €3.18 million during his two years and two months at the helm.  But his ownership of Bank of Ireland shares only increased from 87,595 to 89,756 and these had a value of €1.22 million when his dreams of good times in Las Vegas were at their most intense.  This would have been equivalent to 78% of Soden’s salary in 2003-04

Goggin had worked at the Bank since 1969 and had high hopes of succeeding Keane only to have his eye wiped by Soden.  He succeeded Soden as group chief executive on 3 June 2004 and held that position until February 2009.  He earned a total of €14.5 million in remuneration as chief executive.  Goggin owned 334,126 Bank of Ireland shares when he got the top job and these were worth €3.5 million in June 2004.  His shareholding increased to 600,260 on 31 March 2008, the last date his shareholding was reported in the annual report, and would have had a value of €5.65 million then but would have been worth €312,135 by March 2009. This shareholding in 2008 would have exceeded Goggin’s highest level of total annual remuneration of €3.998 million - in 2006-07.

Boucher only owned 1,906 shares when he was first appointed to the Court of Directors in 2006.  He owned 33,127 ordinary shares on 31 March 2009 after he was appointed group chief executive.  Boucher’s shares are currently worth approximately €66,000.  The porters’ at some of the Bank’s branches probably own more shares.  But what can one presume other than his shareholding is a reflection of his confidence in the Bank?

Boucher’s remuneration from the time he became a member of the Court until he became chief executive was €3.5 million.