Macedonia makes haste on the road to virtue 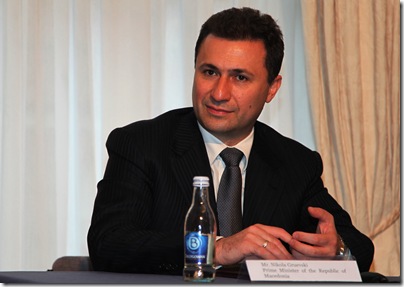 THE Prime Minister of Macedonia, since August 2006, Nikola Gruevski (aged 39), came to Dublin yesterday to promote his country’s candidacy for EU membership and to present its attractiveness as a destination for foreign direct investment. His delegation included the Macedonian Ambassador the the United Kingdom and Ireland, Her Excellency Mrs Marija Efremova.

Macedonia, along with Turkey and Croatia are candidates for EU membership and both must now travel along the tortuous road to virtue before the yellow ribbons of welcome hang from EU Headquarters.

Macedonia achieved its independence from Yugoslavia in 1991. It was the least developed of the former Yugoslav republics in 1991, contributing only 5% of federal output.

Macedonia is slightly over one-third the size of Ireland and has a population of two million. It should not be confused with the ancient region in the north-east of Greece, the birthplace of Alexander the Great, which bears the same name. There has been a dispute with Greece about the name of the Republic of Macedonia arising from duplication that remains unresolved, although trade relations between these two nations has stabilized since 1995 when Greece lifted a 20-month trade embargo.

Unemployment in Macedonia is approximately 34% and almost 30% of the population exist below the poverty threshold. The average monthly wage is €476. The corporate and personal tax rate is 10%. Its GDP is about 10% of that of Ireland ($18.8 billion in 2008).

A progress report was published by the EU last month and it points to encouraging developments under a number of criteria with respect to Macedonia.

Political criteria is sufficiently fulfilled with respect to the conduct of elections, stability of Government and effectiveness of parliament

Some progress is reported in the area of judicial reform and the reform of public administration but further efforts are needed to enhance transparency. Macedonia ranks 71st in the 2009 Transparency International corruption perception index., tying with neighbours’ Bulgaria, Greece and Romania. Further progress is necessary to demonstrate the independence and impartiality of the Macedonian judiciary.

Macedonia is well advanced with respect to the economic criteria for EU membership and has continued to make progress in the development of a functioning market economy. Privatisation is largely completed but the quality of public spending is giving rise to concern especially in relation to transfer payments in excess of inflation, increased public debt, reduced foreign direct investment.

The capacity of Macedonia to assume the responsibilities of EU membership has improved with respect to issues such as transport, customs, taxation, justice, freedom and security. Less progress has been achieved with respect to energy, the environment, employment and social policy.

Macedonia has substantially addressed the key priorities of the accession partnership. On this basis, and in view of the overall progress of reforms, the Commission considers that the country sufficiently fulfils the political criteria set by the Copenhagen European Council in 1993 and the

Stabilisation and Association Process. The country has moved closer towards becoming a functioning market economy and has made progress in a number of areas linked to its ability to take on the obligations of membership.

In the light of the above considerations and taking into account the European Council conclusions of December 2005 and December 2006, the Commission recommends that negotiations for accession to the European Union should be opened with Macedonia.

Maintaining good neighbourly relations, including a negotiated and mutually accepted solution to the name issue, under the auspices of the UN, remains essential.