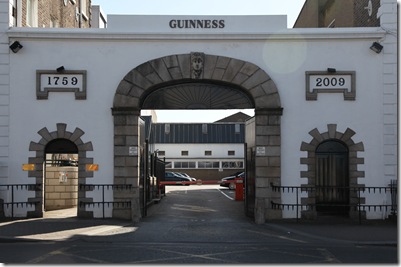 THE world of Pint Drinkers’ will celebrate the 250th anniversary of the establishment of the Guinness Brewery in the centre of Dublin on Thursday, 24th September. The other well known business which can trace its origin to 1759 is Waterford-Wedgewood, founded by Josiah Wedgewood (1730-1795), grandson of Charles Darwin. A celebration of such an important and relatively unique milestone ought to look beyond the business to the wider footprint that the Guinness family have made in Ireland.

Arthur Guinness (1725 – 1803) is thought to have been the descendant of a Catholic family from Co. Down. His first foray into brewing took place at Leixlip, Co Kildare in 1855 with the proceeds of a £100 legacy granted to him by his godfather, Arthur Price the Archbishop of Cashel, who died in 1752. Arthur’s father, Richard (1690 – 1766), had been land steward to the Archbishop.

Not the first Irish brewery,
but the most enduring!

Arthur was not the only brewer in Dublin at that time. Joseph Leeson, 1st Earl of Milltown (1701- 1783) was a rival. Leeson’s father came to Dublin around 1680 and became a wealthy brewer. Like Arthur, Leeson was also a politician and represented Rathcormack in the House of Commons between 1743 and 1756. When he became Viscount Russborough he commissioned the magnificent house in County Wicklow, designed by Richard Cassels and built between 1741 and 1755, which bears this name. In 1728 Suesey Street in Dublin was renamed Leeson Street in his memory.

His daughter, Cecilia, married David La Touche who founded the Bank of Ireland, the oldest bank in Ireland, on 25 June 1783. 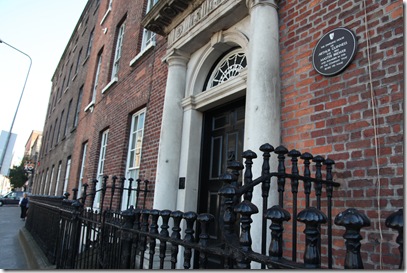 Arthur and his wife Olivia had 21 children, of whom 10 survived to adulthood. They lived at Beaumont House in north Dublin. When he moved the business from Leixlip to St James Gate (photographed above) four years later. He negotiated a 9,000 year lease on a 4-acre site at an annual rent of £45.

He was a supporter of Henry Grattan (1746 – 1820), Irish MP for the constituency of Charlemont and advocate for legislative freedom for the Irish Parliament in College Green, not least because Grattan promised to reduce the excise on beer. But Arthur also supported the principle of Catholic Emancipation but was not in favour of the 1798 Rebellion.

The St James Gate complex was extended to 64 acres and became the largest brewery in the world.

Apart form the sheer longevity of the business and the iconic character of the brand, the involvement of the Guinness descendents in politics, business and philanthropy was far reaching

Sir Benjamin Lee Guinness (1798 – 1868), Head Brewer, the third son of Arthur II and grandson of the founder succeeded to the business. He took control of the brewery in 1839 at the age of 41. He was also Lord Mayor of Dublin in 1851 and became a Conservative MP representing the City of Dublin between 1865 until his death in 1868.

His personal accomplishments included the provision of £150,000 to restore St Patrick’s Cathedral, Dublin between 1860 and 1865. He was also the patron responsible for the restoration of the adjacent Marshes Library. He purchased and restored Ashford Castle in County Galway in 1855. 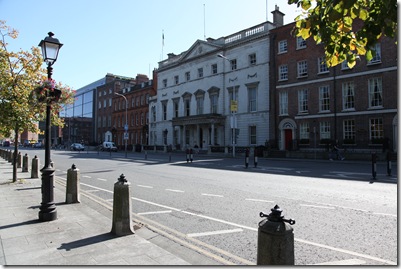 Sir Benjamin married his first cousin, Elizabeth Guinness (daughter of Edward Guinness, a Dublin solicitor who was the 4th child of the founder and brother of Arthur II), in 1837 and they purchased 80 St Stephen’s Green in 1856 and the adjacent house in 1862. Both are now known as Iveagh House. Sir Benjamin personally created Iveagh House (photographed) from the two that preceded it and created the magnificent, elaborately decorated building in Portland Stone that now endures. 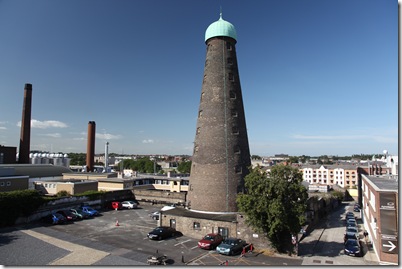 The 4th generation of control passed to Edward Cecil Lee (1847-1927), 4th child of Sir Benjamin Lee Guinness and his brother Sir Arthur Edward Guinness, 1st Baron Ardilaun, Arthur Edward purchased the half-interest of his brother for £600,000 and took sole control of the business in 1876 at the age of 29. He became the richest man in Ireland when the business raised £6 million after the business was successfully floated on the London Stock Exchange in 1886. The windmill (photographed) was built in 1926 to provide energy to the brewery and is to be restored.

He was created Baron Iveagh ion 21 January 1891, choosing a name connected to County Down. He advanced to Viscount Iveagh on 18 December 1905 and was created 1st Earl of Iveagh on 30th September 1919.

This was the man, who with his wife and cousin, Adelaide Maria, bought Farmleigh on the periphery of the Phoenix Park. Farmleigh is an estate of 78 acres and was acquired by the Irish Government for €29.5 million in 1999.

It was a small Georgian house when the newly-wedded couple bought Farmleigh in 1873. The launched a major building programme between 1881 and 1884 to extend the house to the West and refurbish it, adding a third story. In 1896 a ballroom was added. A large conservatory was created in 1901 and the gardens were further developed with the planting of broadleaves, making the estate a fabulous venue for elegant entertaining.

Bur the 1st Earl of Iveagh was also a deeply committed philanthropist. He spent £1 million establishing what is now the Guinness Trust. This Trust has provided 100,000 people with 56,000 affordable homes in England and Ireland. The Irish venture, known as the Iveagh Trust, was the largest single episode of urban renewal in Edwardian Dublin and was set up to clear the slums in the vicinity of St Patrick’s Cathedral. The centrepiece is the Iveagh Baths on Bride Street. These are set on a granite plinth decorated with terracotta panels. The housing block consists of five stories surmounted by copper domes over stairwells and ornate art nouveau details in the gable ends. The shops on the ground floor are still in use today.

He was also Chancellor of Trinity College from 1908 (the year UCD was established) until his death in 1927. He provided funds for the Physics and Botany building at the College.

His 3rd son, Lt Col Walter Edward, 1st Baron Moyne (1880 – 1944) was a resident British Minister of State for the Middle East and was assassinated in Cairo on 6 November 1944 by a militant Zionist underground group on account of this disposition to the evolving Palestine. He had been MP for Bury St Edmunds from 1907 to 1931.

He was succeeded to the title by Bryan Guinness (1905 – 1992) and became the 2nd Baron Moyne on the death of his father.

The former Tory MP, Jonathan Guinness (b1930), married three times and father of 8 children became the 3rd Baron Moyne in 1992. 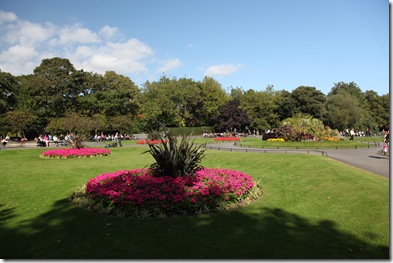 Lord Ardilaun, 1840 – 1915, lived in what is now St Anne’s Park Raheny, Dublin and he is remembered for restoring St Stephen’s Green and giving it to the people of Dublin in 1880. He succeeded his father as Conservative MP for the City of Dublin in 1868 but only held the seat for a year but was elected again in 1874 and held it until 1880.

His home in later life was at Ashford Castle and he was conferred on 22 June 1880 with the title Baron Ardilaun of Ashford.

The descendants of the 1st Earl of Iveagh presented Iveagh House to the nation in 1939 and it has been the headquarters of the Department of Foreign Affairs since.

Rupert Edward Cecil Lee Guinness succeeded his father as Chancellor of Trinity College Dublin from 1927 – 1963, a tenure that extended for 45 years.

He was succeeded in this role by Frederick Boland, once Secretary-General of the Department of Foreign Affairs, first Irish Ambassador to Great Britain (1950-56) and Ambassador of the United Nations (1956) and was President of the General Assembly when Nikita Khrushchev took off his shoe and pounded it on the lectern of the Assembly.

Rupert was the 2nd Earl of Iveagh from the time his father died in 1927 until his own death in 1967.

The last family member to hold an executive position in Guinness was Arthur Francis Benjamin Guinness. His father, Arthur Onslow Edward Guinness, was the second son of Rupert Edward Cecil Lee Guinness. His eldest son, Richard Guinness, died in the year he was born – 1906.

He was the 3rd Earl of Iveagh from 1967 until his death in 1992. He was also the last Guinness family member for whom Farmleigh was home.

His son, Arthur Edward Rory Guinness (b 1969) became the 4th Earl of Iveagh. He farms a plot of land in Elveden Suffolk comprising 22,486 acres. His heir apparent is Arthur Benjamin Geoffrey Guinness who was born in 2003.

Austrian born Ernest Saunders was Chief Executive of Guinness Plc between 1981 and 1986. He launched a friendly takeover bid to acquire United Distillers in 1986 which was the subject of a takeover interest by another hostile bidder. The price of Guinness shares increased. The Guinness bid was successful. Saunders and three other Guinness executives were charged in 1990 with conspiracy and false accounting in an attempt to manipulate the price of Guinness shares to assist with £2.7 billion takeover bid. The defendants were to buy Guinness shares so as to support the share price and assist in the takeover of the much bigger United Distillers Company. Saunders raised $100 million to buy Guinness shares but this money was not accounted for appropriately in the Guinness accounts. Saunders was jailed for 5 years for false accounting, conspiracy and theft. The sentence was halved on appeal. Saunders was released from prison on 28 June 1991 after 10 months with full parole. It was claimed that he suffered from dementia but subsequent to his prison release he worked as a business consultant.

Guinness is owned by Diageo. A proposal to relocate the brewery from St James Gate was announced last year.

The Guinness Storehouse is the most popular visitor centre in the city. The Storehouse had lain idle for many years and was slated for demolition but the estimated cost of demolition saved it. It is the earliest steel framed multi-storey building in Britain and Ireland with such magnificent detailing in its brickwork.

The Storehouse was built in 1904 as the fermentation house for the brewery. The structure is almost square in structure allowing natural light to reach the ground floor. The steelwork is exposed.

The Pint continues to have a special place in the hearts of consumers in Ireland and elsewhere. The tax inclusive price of a Pint has increased by 54.5% in the past decade compared to a 44.2% increase in the consumer price index. The tax content of a Pint is currently 26.9%.

The Dublin brewery supplies the entire British and Irish market following the closure of the Park Royal brewery in 2005.