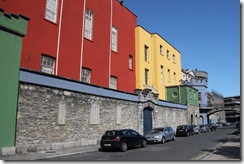 The European Union, as a whole, is a high tax area. The sum of taxes and social security contributions in the 27 Member States amounted to 39.8% of GDP. This proportion is about 12 percentage points higher that those of the United States and Japan. The EU Tax : GDP ratio is also high among major non-European OECD Members.

Tax : GDP ratios tend to be higher among the first 15 Member States of the EU than among the more recent Eastern European Members.

New Zealand if is the only country non-European OECD Member whose Tax : GDP ratio exceeds 35%.

A stabilisation in the overall EU tax burden has evolved following increases in government expenditure and coincidental taxes for a number of years.

The following summarises the position in Ireland:

Total public expenditure as a percent of GDP for selected countries between 1974 and 2004 is set out below for illustrative purposes:

These trends are a reflection of a more extensive role for the public service since the 1970’s. A number of Member States took advantage of buoyant tax revenues at the end of the 1990’s to reduce the tax burden, through cuts in personal income tax, social security contributions and corporate taxes. While the overall tax burden in some Member States decreased after 2000, this trend was not sustainable after 2005 – due to slower economic growth between 2000 and 2004. Some States needed tax revenue to reduce their government deficit, making it difficult to cut taxes

The current Irish standard rate of Corporation Tax of 12½% applies to trading income and income from vocations and professions.

A rate of 25% Corporate Tax applies to non-trading income – interest, rents, royalties, as well as income from what are defined as ‘excepted trades’ – minerals, petroleum, dealing in or developing land, other than construction activities.

A rate of 25% applies to capital gains, except for gains from the disposal of development land, the gains on which are charged at 25% and are not included in the profits chargeable to corporate tax.

Corporate taxes will account for about 11% of all national taxes in Ireland in 2009 and there will be a potential drop of €2.6 billion in 2009 attributable to the recession and the treachery and delinquency of Irish banks and the ‘loose stools’ that posture as their top-level leadership.

The EU-27 average rate of corporate tax has declined steadily from 35.3% in 1995 to 23.5% in 2009. This trend has reduced fears of Member States competing to successively undercut each others tax rates. Enlargement had reinforced such fears as the tax rates especially in newer Member States reached levels of more than 10%-points lower than those of established Member States.

Taxes on corporate income in Europe is not only levied through corporation tax but, in some Member States through surcharges or additional taxes levied on tax bases that are similar but often not identical to traditional corporation tax. The simple corporate tax rate in the table above has been adjusted by Eurostat for comparison purposes. If several rates exist only the ‘basic’ top rate is presented. Existing surcharges and averages of local taxes are added to the standard rate. Adjustments have been made for Belgium, Germany, Estonia, France, Hungary, Italy, Lithuania, Luxembourg and Portugal.

Tax Issues in the Future

The economic impact of ageing will raise many challenges in terms of the structure of taxation. The working-age population will shrink and a fall in population growth rates is anticipated. Reforms in taxation and welfare that will increase productivity and labour supply will be desirable. Welfare will have to facilitate the long term sustainability of public finances.

The financing of welfare may rely less on income taxes and savings, as these too are expected to decline.

The impact of globalisation and tax competition could force a shift of the tax burden from geographically mobile to immobile tax bases. But such a shift is complex because the effect can take diverse forms. Globalisation may render it increasingly difficult to collect taxes from mobile bases and motivate a search for new alternatives – such as polluting activities and environmental taxes.