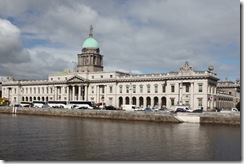 THE arson of the Customs House by the Dublin Brigade of the IRA on 25 May 1921 resulted in the destruction of many records of genealogical significance, some dating back to the 13th century.

The cost of the destruction of the James Gandon designed building was then in the region of £2 million  but the frustration of those across the world seeking to trace their Irish roots was incalculable. The Customs House cost £200,000 to build in the decade between 1781 and 1791

The National Archives of Ireland has made the Irish census of Sunday, 2 April 1911 available on the internet. I have found this an extremely user-friendly site that offers multiple search options to trace individuals across the thirty two counties.

The census was taken every ten years from 1821 to 1911. The returns are arranged by townland, or in the case of urban areas, streets. If you wish to see the returns for a townland, or street, try and identify the relevant District Electoral Division.

The enumerators were drawn from the ranks of the Royal Irish Constabulary and not the civilian population as was the case in England. The census details available on the web site includes facsimiles of the actual census forms. There are also questions about religion, capacity to speak Irish and whether the respondent can read and write.

It is possible to see the census details of prominent individuals of that time, including

The servants and retainers of the Earl of Aberdeen, Lord Lieutenant of Ireland from 1905 to 1915

Dublin, with a population of 477,000 people in 1911, was a city deeply divided by wealth, class and religion. The political power of Ireland reposed in the British administration at Dublin Castle. The Lord Lieutenant was the Earl of Aberdeen who had formerly been Governor of Canada and had held this position briefly prior to that appointment in 1886 under the patronage of Prime Minister, William Gladstone. The Chief Secretary was Augustine Birrell, who held this office from 1907 until the aftermath of the Easter Rising in 1916. Birrell, as President of the Board of Education, had been the sponsor of the legislation in 1908 setting up the National University of Ireland and Queen’s University Belfast. He also sponsored the Irish Land Act 1909 which facilitated the compulsory purchase of land to relieve congestion. A huge number of people lived in extremely underprivileged circumstances.

It is useful to start knowing the name of the family concerned, the parish, or townland in which they lived and the approximate date.

There are no complete set of census returns for the period prior to 1901. but there are two record which provide some useful insights:

The Tithe Applotment books were compiled between 1823 and 1838 in order to determine the amount which occupiers of agricultural holdings of over one acre should pay in tithes to the Church of Ireland – the main Protestant church and the church established by the State until 1871. Tithes had been paid in kind before this time; they were now required in cash and even those who were not members of the Church of Ireland were obliged to pay! Tithes were abolished in 1838.

There is a manuscript book for almost every parish in the country, giving the names of occupiers, the amount of land held and the sums to be paid in tithes. These records are now available in microfilm at the Public Record Office of Northern Ireland Belfast and the National Archives, 8 Bishop Street, Dublin 8.

The Tithe Defaulters Lists in the National Archives detail people who refused to pay tithes as part of what was known as the Tithe War from 1831 to 1838, which was very vigorous in Leinster and Munster. The 29,000 names were recorded by Church of Ireland clergy.  Tithes in Munster were payable on potato patches but not on grassland.

The Primary Valuation (Griffiths Valuation), was established between 1847 and 1864. There is a printed valuation book for each barony or poor law union in Ireland, showing the names of occupiers of land and buildings, the names of those from whom they were leased and the amount and value of the property held. It was the first ever full scale valuation of property in Ireland.  These records are available on microfilm at the National Archives. and on the Irish Origins web site.

Good luck with your investigations!