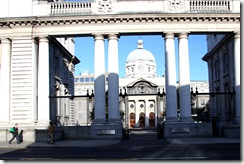 THE Government is suggesting that the latest data on the performance of the Irish economy, which indicates a contraction so far of 7.4% in GDP, was as anticipated last April when the second Budget was introduced and that a slight increase in merchandise exports of €20.79 billion (+€154 million) from multinational companies in the second quarter reflects an encouraging sign.

One quarter of the merchandise exports comprise computer software that was not incorporated as part of computer hardware or physical media but separately transmitted by electronic means.

Outward direct investment from the International Financial Services Centre was €5.73 billion in Q2.

Some €4.77 billion was reinvested in Ireland by multinational companies and this was combined with an investment €12.56 billion brought directly from overseas.

The population of Ireland has risen to 4.45 million, an increase of 38,000 in the 12 months since April 2008 despite the emergence again of net outward migration – of 7,800 persons. The increase is accounted for by a record birth rate. This trend will enlarge the dependency ratio and requirement for resources in education.

The media are absorbed by the ramifications of NAMA. But I find it instructive to view this banking crisis in a broader context because that is what will define our prospects for economic recovery.

The last time the banking system was in relative equilibrium was 2002, the year before the € became our everyday currency and the year before The Financial Regulator was established.

The Central Bank provide a sector breakdown of outstanding credit each quarter. While, not surprisingly attention is drawn to the €96 billion owing by the real estate sector and €21 billion owing by the construction sector, the growth in personal borrowing of over €80 billion is bound to hit Skid Row in a deteriorating economy.

The growth in borrowing by manufacturing was quite moderate at under 75% given that it is from this source that exports and employment are generate. The following table sets out the main changes:

The following table illustrates that while Ireland’s GDP grew by 82.4% private sector credit expanded by 175.3%.

Response of The Financial Regulator
The Chairman of the Regulator stated in his 2008 annual report  stated “our strategic approach to regulation was framed in a much more benign environment but that the Regulator had taken steps to slow bank lending, in particular in 2006 and again in 2007”.
The first chief executive of the Regulator, Liam O’Reilly, stated in the 2005 annual report “along with the Central Bank, we are concerned about the rapid rise in the levels of indebtedness in the economy and are well aware that if conditions change adversely, many people could be severely affected. We monitor and require institutions to anticipate and prevent risk issues now rather than to have to address problems down the line. There has been much debate about high loan to value ratios in recent days for mortgage borrowers. In this debate, the critical issue is the ability of borrowers to repay the loan in full. It is the responsibility of each financial institution to ensure that their credit standards, provisioning policy and levels of capital are appropriate to provide not only for today, but, in the event of any future downturn in the market. So long as the quality of credit is maintained and the ability to repay is not compromised this is not a problem. We have a responsibility to inform consumers which we are doing through our publications, which set out the risks and benefits of various financial products, including mortgages and personal loans.”
O’Reilly’s focus seems to have been more acute when it came to securing his next sinecure.  He became a director of Irish Life & Permanent Plc last September just before a banks that had customer deposits of €12.9 billion was to provide €7.5 billion to masquerade the balance sheet of Anglo Irish Bank on 30 September 2008.  He was presumably recruited as an authentic advocate of financial regulation compliance but in March 2009 the same bank was fined €600,000 by the Regulator for serious infringements.  Does this mean that O’Reilly is as effective as a director of this bank as he was when chief executive of The Financial Regulator.  His ability to control and regulate the imbeciles that took over the asylum as not unlike that of a police riot squad wearing pink bedroom slippers (with ribbons, of course).  The reasons for the fine have not been disclosed.
Posted by Myles Duffy at 8:49 PM